To Represent Bideford at World Convention - 1980 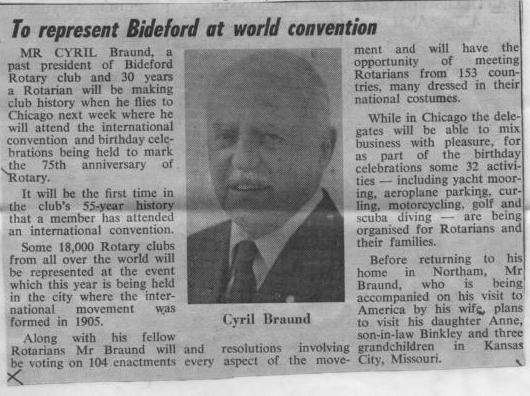 Mr Cyril Braund, a past president of Bideford Rotary club and 30 years a Rotarian will be making club history when he flies to Chicago next week where he will attend the international convention and birthday celebrations being held to mark the 75th anniversary of Rotary. It will be the first time in the club's 55-year history that a member has attended an international convention.

Some 18,000 Rotary clubs from all over the world will be represented at the event which this year is being held in the city where the international movement was formed in 1905. Along with his fellow Rotarians Mr Braund will be voting on 104 enactments and resolutions involving every aspect of the movement and will have the opportunity of meeting Rotarians from 153 countries, many dressed in their national costumes.

While in Chicago the delegates will be able to mix business with pleasure, for as part of the birthday celebrations some 32 activities - including yacht morring, aeroplane parking, curling, motorcycling, golf and scuba diving - are being organised for Rotarians and their families. Before returning to his home in Northam, Mr Braund who is being accompanied on his visit to America by his wife, plans visit his daughter Anne, son-in-law Binkley and three grandchildren in Kansas City, Missouri.