When Anthony and Myrtle Langham embarked on ‘attempt to collect together all available information about Lundy and to present as complete a picture of the island – past and present – as is yet possible’ they set themselves a monumental task. 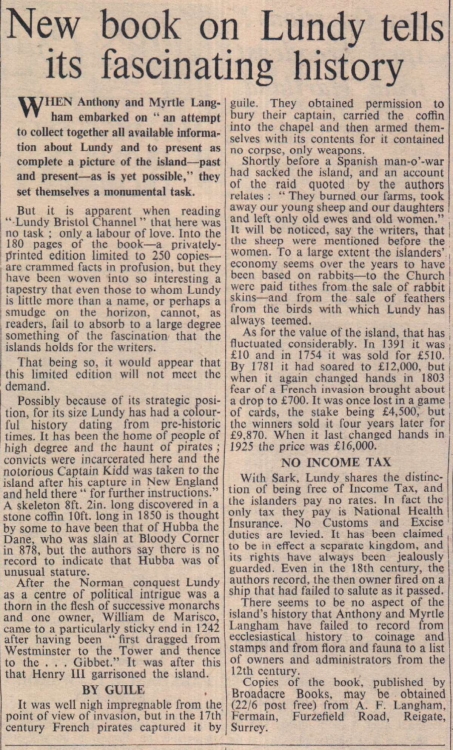 But it is apparent when reading ‘Lundy Bristol Channel’ that here was no task; only a labour of love – a privately printed edition limited to 250 copies – are crammed facts in profusion, but they have been woven into so interesting a tapestry that even those to whom Lundy is little more than a name, or perhaps a smudge on the horizon, cannot, as readers, fail to absorb to a large degree something of the fascination that the island holds for the writers.
It has been the home of people of high degree and the haunt of pirates; the notorious Captain Kidd was taken to the island after his capture in New England; a skeleton discovered in a stone coffin is thought to have been that of Hubba the Dane who was slain at Bloody Corner in 878.
After the Norman conquest Lundy as a centre of political intrigue was a thorn in the flesh of successive monarchs and one owner, William de Marisco, came to a particularly sticky end in 1242.
With Sark, Lundy shares the distinction of being free of Income Tax, and the islanders pay no rates. In fact the only tax they pay is National Health Insurance. No Customs and Excise duties are levied.
The full Gazette article is dated 3 March 1961