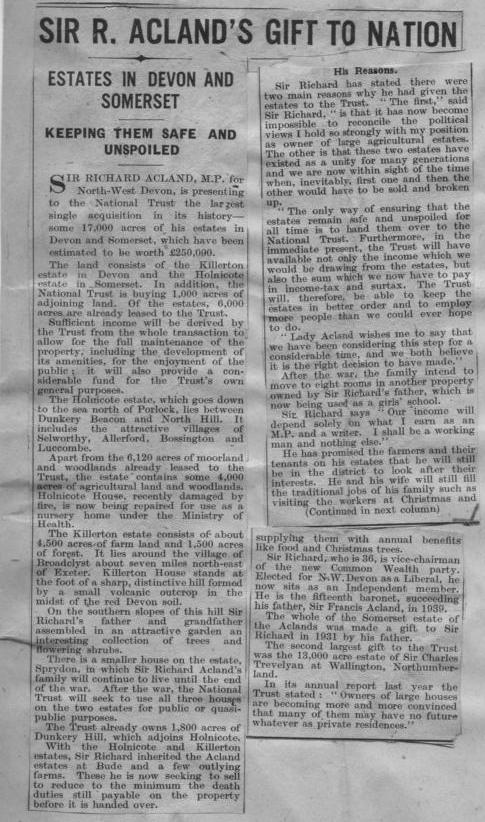 Estates in Devon and Somerset - Keeping them safe and unspoiled

Sir Richard Acland, M.P. for North-West Devon, is presenting to the National Trust the largest single acquisition in its history - some 17,000 acres of his estates in Devon and Somerset, which have been estimated to be worth £250,000. The land consists of the Killerton estate in Devon and the Holnicote estate in Somerset. In addition, the National Trust is buying 1,000 acres of adjoining land. Of the estates, 6,000 acres are already leased to the Trust. Sufficient income will be derived by the Trust from the whole transaction to allow for the full maintenance of the property, including the development of its amenities, for the enjoyment of the public: it will also provide a considerable fund for the Trust's own general purposes. The Holnicote estate, which goes down to the sea north of Porlock, lies between Dunkery Beacon and North Hill. It includes the attractive villages of Selworthy, Allerford, Bossington and Luccombe.

Apart from the 6,120 acres of moorland and woodlands already leased to the Trust, the estate contains some 4,000 acres of agricultural land and woodlands. Holnicote House, recently damaged by fire, is now being repaired for use as a nursery home under the Ministry of Health. The Killerton estate consists of about 4,500 acres of farm land and 1,500 acres of forest. It lies around the village of Broadclyst about seven miles north-east of Exeter. Killerton House stands at the foot of a sharp, distinctive hill formed by a small volcanic outcrop in the midst of the red Devon soil. On the southern slopes of this hill Sir Richard's father and grandfather assembled in an attractive garden an interesting collection of trees and flowering shrubs.

There is a smaller house on the estate, Sprydon, in which Sir Richard Acland's family will continue to live until the end of the war. After the war, the National Trust will seek to use all three houses on the two estates for public or quasi-public purposes. The Trust already owns 1,800 acres of Dunkery Hill, which adjoins Holnicote. With the Holnicote and Killerton estates, Sir Richard inherited the Acland estates at Bude and a few outlying farms. These he is now seeking to sell to reduce to the minimum the death duties still payable on the property before it is handed over.

Sir Richard has stated there were two main reasons why he had given the estates to the Trust. 'The first,' said Sir Richard, 'is that is has now become impossible to reconcile the political views I hold so strongly with my position as owner of large agricultural estates. The other is that these two estates have existed as a unity for many generations and we are now within sight of the time when, inevitably, first one and then the other would have to be sold and broken up. The only way of ensuring that the estates remain safe and unspoiled for all time is to hand them over to the National Archive. Furthermore, in the immediate present, the Trust will have available not only the income which we would be drawing from the estates, but also the sum which we now have to pay in income-tax and surtax. The Trust will, therefore, be able to keep the estates in better order and to employ more people than we could ever hope to do.

'Lady Acland wishes me to say that we have been considering this step for a considerable time, and we both believe it is the right decision to have made.'

After the war, the family intend to move to eight rooms in another property owned by Sir Richard's father, which is now being used as a girls' school. Sir Richard says 'Our income will depend solely on what I earn as an M.P. and a writer. I shall be a working man and nothing else." He has promised the farmers and their tenants on his estates that he will still be in the district to look after their interests. He and his wife will still fill the traditional jobs of his family such as visiting the workers at Christmas and supplying them with annual benefits like food and Christmas trees.

Sir Richard, who is 36, is vice-chairman of the new Commons Wealth party. Elected for N.W.Devon as a Liberal, he now sits as an Independent member. He is the fifteenth baronet, suceeding his father, Sir Francis Acland, in 1939. The whole of the Somerset estate of the Aclands was made a gift to Sir Richard in 1931 by his father. The second largest gift to the Trust was the 13,000 acre estate of Sir Charles Trevelyan at Wallington, Northumberland. In its annual report last year the Trust stated: 'Owners of large houses are becoming more and more convinced that many of them may have no future
whatever as private residences.'