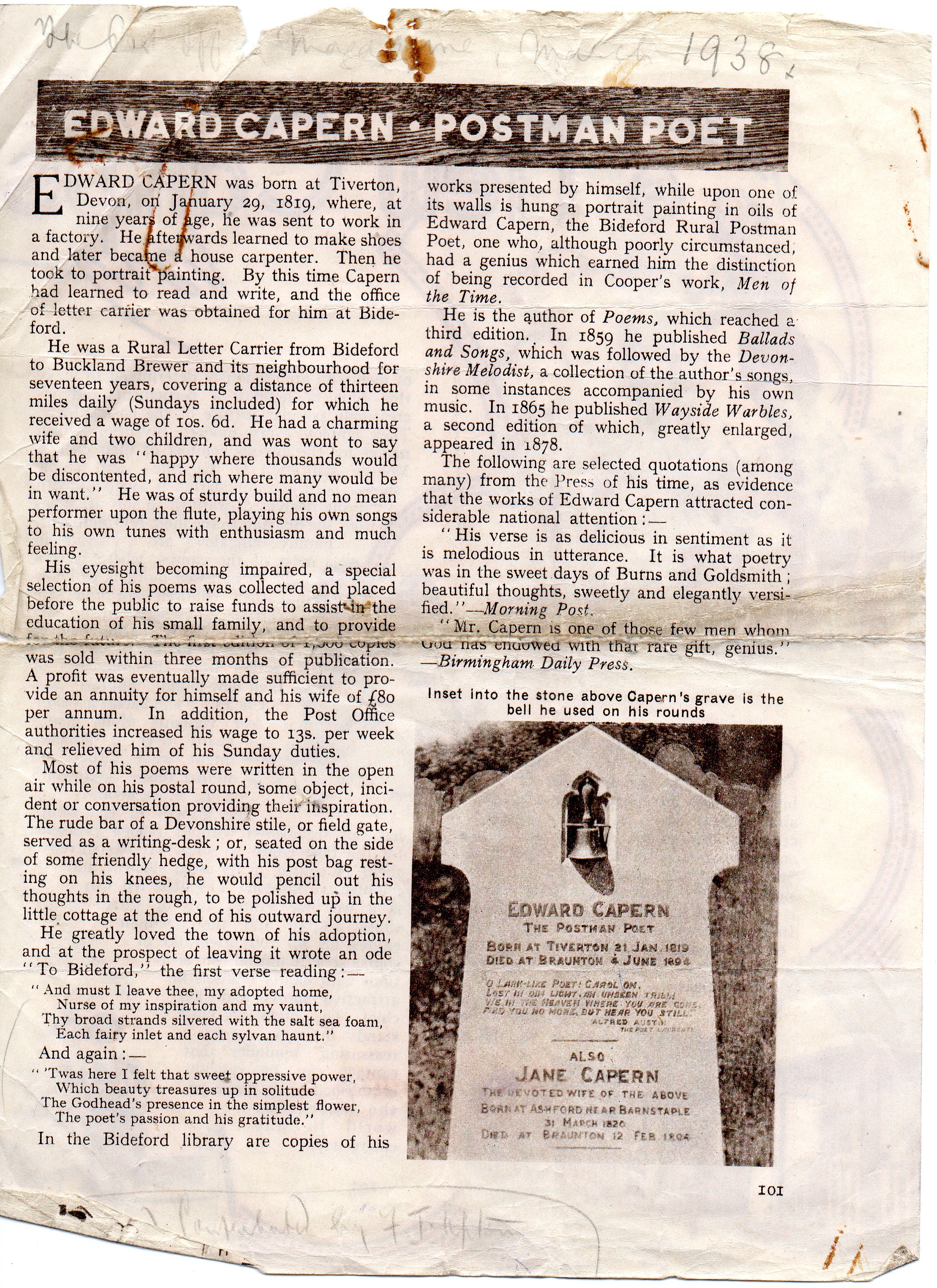 Edward Capern was born in Tiverton, Devon on January 29, 1819, where, at nine years of age, he was sent to work in a factory. He afterwards learned to make shoes and later became a house carpenter. Then he took to portrait painting. By this time Capern had learned to read and write, and the office of letter carrier was obtained for him at Bideford.

He was a Rural Letter Carrier from Bideford to Buckland Brewer and its neighbourhood for seventeen years, covering a distance of thirteen miles daily (Sundays included) for which he received a wage of 10s. 6d. He had a charming wife and two children, and was wont to say that he was "happy where thousands would be discontented, and rich where
many would be in want." He was of sturdy build and no mean performer upon the flute, playing his own songs to his own tunes with enthusiasm and much feeling.

His eyesight becoming impaired, a special selection of his poems was collected and placed before the public to raise funds to assist in the education of his small family, and to providefor the ....... copies was sold within three months of publication. A profit was eventually made sufficient to provide an annuity for himself and his wife of £80 per annum. In addition, the Post Office authorities increased his wage to 13s. per week and relieved him of his Sunday duties.

Most of his poems were written in the open air while on his postal round, some object, incident or conversation providing their inspiration. The rude bar of a Devonshire stile, or field gate, served as a writing-desk; or seated on the side of some friendly hedge, with his post bag resting on his knees, he would pencil out his thoughts in the rough, to be polished up in the little cottage at the end of his outward journey.

He greatly loved the town of his adoption, and at the prospect of leaving it wrote an ode "To Bideford" the verse reading: And mus tI leave thee, my adopted home, Nurse of my inspiration and my vaunt, Thy broad strands silvered with the salt sea foam, Each fairy inlet and each sylvan haunt." And again: "Twas here I felt that sweet oppressive power, Which beauty treasures up in solitude The Godhead's presence in the simplest flower, The poet's passion and his gratitude."

In the Bideford library are copies of his works presented by himself, while upon one of its walls is hung a portrait painting in oils of Edward Capern, the Bideford Rural Postman Poet, one who, although poorly circumstanced, had a genius which earned him the distinction of being recorded in Cooper's work, Men of the Time. He is the author of Poems, which reached a third edition. In 1859 he published Ballads and Songs, which was followed by the Devonshire Melodist, a collection of the author's songs, in some instances accompanied by his own music. In 1865 he published Wayside Warbles, a second edition of which, greatly enlarged, appeared in 1878.

The following are selected quotations (among many) from the Press of his time, as evidence that the works of Edward Capern attracted considerable national attention: "His verse is as delicious in sentiment as it is melodious in utterance. It is what poety was in the sweet days of Burns and Goldsmith; beautiful thoughts, sweetly and elegantly versified." "Mr Capern is one of those few men whom God has endowed with that rare gift, genius."