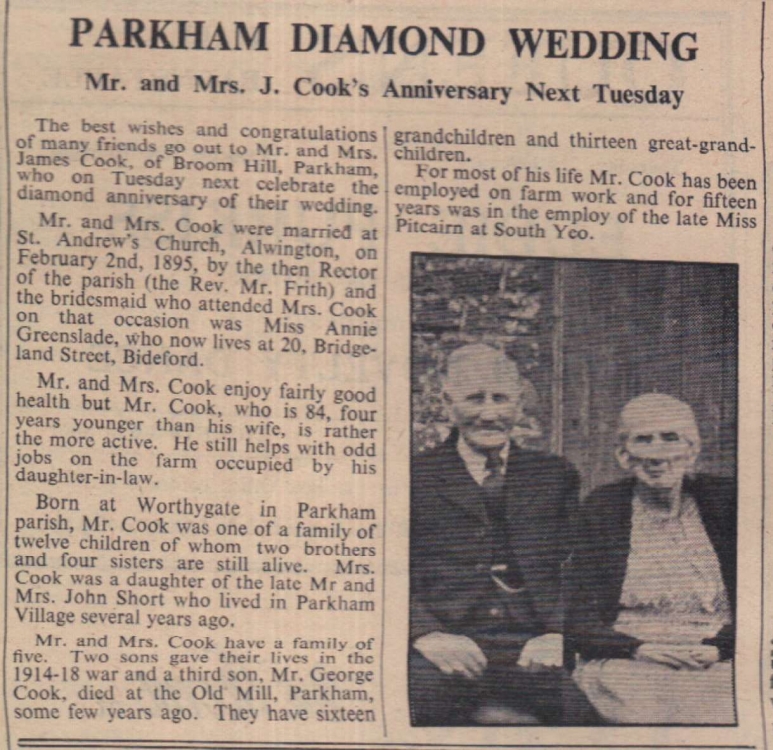 The best wishes and congratulations of many friends go out to Mr and Mrs James Cook, of Broom Hill, Parkham, who on Tuesday next celebrate the diamond anniversary of their wedding.
Mr and Mrs Cook were married at St Andrew’s Church, Alwington, on February 2nd 1895, by the then Rector of the parish, Rev Mr Frith, and the bridesmaid who attended Mrs Cook was Miss Annie Greenslade, who now lives at 20 Bridgeland Street, Bideford.
Born at Worthygate in Parkham parish, Mr Cook was one of a family of twelve children of whom two brothers and four sisters are still alive. Mrs Cook was the daughter of the late Mr and Mrs John Short who lived in Parkham Village several years ago.
Mr and Mrs Cook have a family of five. Two sons gave their lives in the 1914-1918 war and a third son, Mr George Cook, died at the Old Mill, Parkham, some few years ago. They have sixteen grandchildren and thirteen great-grandchildren.
For most of his life Mr Cook has been employed on farm work and for fifteen years was in the employ of the late Miss Pitcairn at South Yeo.
The full Gazette article is dated 28 January 1955.