Capt William J Harris OBE of ‘Fernlea’, Appledore, Commodore of Sir William Reardon Smith’s fleet of cargo vessels, is shortly to take command of the new ship which was to be manned by eight British officers and by the forty Lascar seamen who were killed in the recent Alpine air crash. 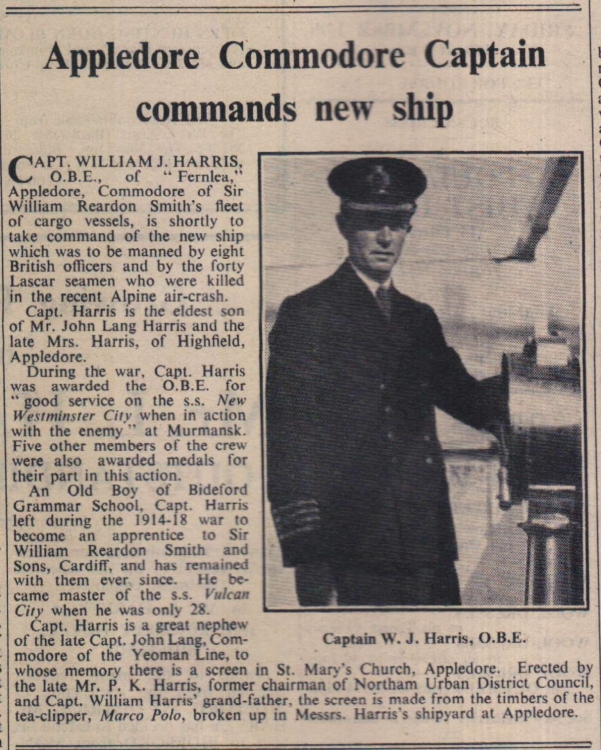 Capt Harris is the eldest son of Mr John Lang Harris and the late Mrs Harris, of Highfield, Appledore.
During the war, Capt Harris was awarded the OBE for ‘good service on the ss New Westminster City when in action with the enemy’ at Murmansk. Five other members of the crew were also awarded medals for their part in this action.
An Old Boy of Bideford Grammar School, Capt Harris left during the 1914-1918 war to become an apprentice to Sir William Reardon Smith and Sons, Cardiff, and has remained with them ever since. He became master of the ss Vulcan City when he was only 28.
Capt Harris is a great nephew of the late Capt John Lang, Commodore of the Yeoman Line, to whose memory there is a screen in St Mary’s Church, Appledore. Erected by the late Mr P K Harris, former chairman of Northam Urban District Council, and Capt William Harris’ grandfather, the screen is made from the timbers of the tea clipper, Marco Polo, broken up in Messrs Harris’ shipyard at Appledore.