For a number of years past there has been a steady growth in the size of Bideford. 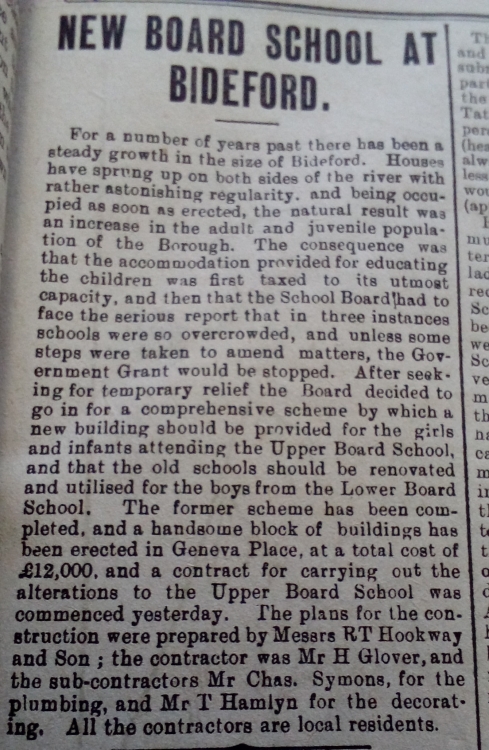 Houses have sprung up on both sides of the river with rather astonishing regularity, and being occupied as soon as erected, the natural result was an increase in the adult and juvenile population of the Borough. The consequence was that the accommodation provided for educating the children was first taxed to its utmost capacity, and then that the School Board had to face the serious report that in three instances schools were so overcrowded, and unless some steps were taken to amend matters, the Government Grant would be stopped. After seeking for temporary relief the Board decided to go in for a comprehensive scheme by which a new building should be provided for the girls and infants attending the Upper Board School, and that the old schools should be renovated and utilised for the boys from the Lower Board School. The former scheme has been completed, and a handsome block of buildings has been erected in Geneva Place, at a total cost of £12,000, and a contract for carrying out the alterations to the Upper Board School was commenced yesterday. The plans for the construction were prepared by Messrs R T Hookway and Son; the contractor was Mr H Glover, and the sub-contractors Mr Charles Symons, for the plumbing, and Mr T Hamlyn for the decorating. All the contractors are local residents.

Article from the Gazette in 1903