Home on Leave From Italy 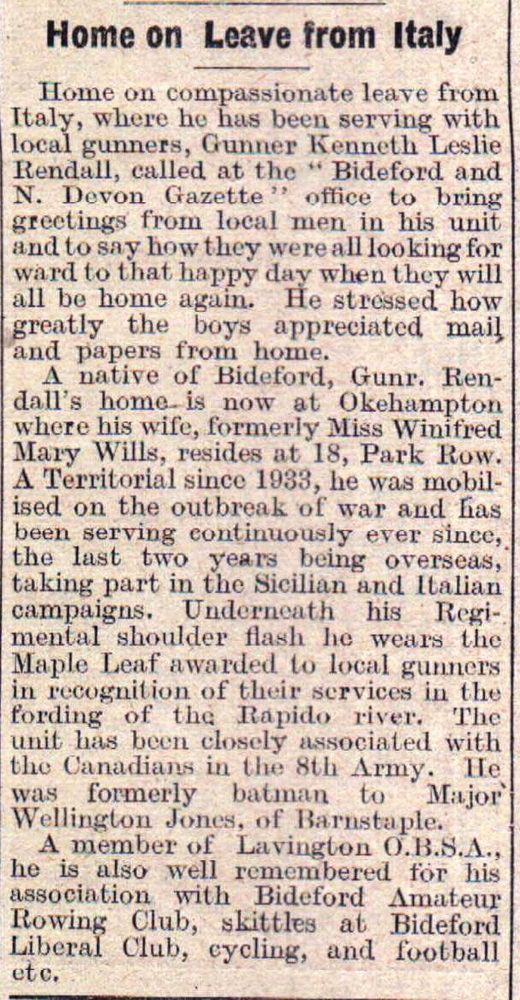 Home on compassionate leave from Italy, where he has been serving with local gunners, Gunner Kenneth Leslie Rendall, called at the "Bideford and N. Devon Gazette" office to bring greetings from local men in his unit and to say how they were all looking forward to the happy day when they will all be home again. He stressed how greatly the boys appreciated mail, and papers from home.
A native of Bideford, Gunr. Rendall's home is now in Okehampton where his wife, formerly Miss Winifred Mary Wills, resides at 18 Park Row. A Territorial since 1933, he was mobilsied on the outbreak of war and has been serving continuously ever since, the last two years being overseas, taking part in the Sicilian and Italian campaigns. Underneath his Regimental shoulder flash he wears the Maple Leaf awarded to local gunners in recognition of their services in the fording of the Rapido river. The unit has been closely associated with the Canadians in the 8th Army. He was formerly batman to Major Wellington Jones, of Barnstaple.

A members of Lavington O.B.S.A., he is also well remembered for his association with Bideford Amateur Rowing Club, skittles at Bideford Liberal Club, cycling and football etc.