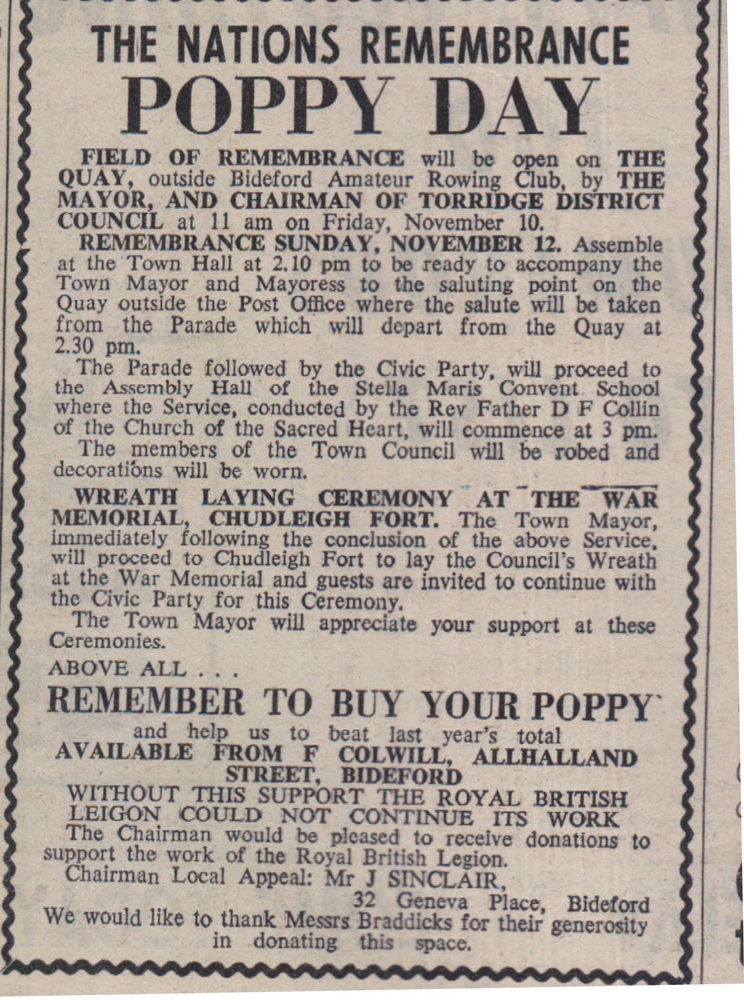 FIELD OF REMEMBRANCE will be open on The Quay, outside of Bideford Amateur Rowing Club, by the Mayor and Chairman of Torridge District Council at 11am on Friday, November 10.
REMEMBRANCE SUNDAY, NOVEMBER 12. Assemble at the Town Hall at 2.10pm to be ready to accompany the Town Mayor and Mayoress to the saluting point on the Quay outside the Post Office where the salute will be taken from the Parade which will depart from the Quay at 2.30pm.
The Parade followed by the Civic Party, will proceed to the Assembly Hall of the Stella Maris Convent School where the Service, conducted by Rev Father D F Collin of the Church of the Sacred Heart, will commence at 3pm.
The members of the Town Council will be robed and decorations will be worn.

WREATH LAYING CEREMONY AT THE WAR MEMORIAL, CHUDLEIGH FORT. The Town Mayor, immediately following the conclusion of the above service, will proceed to Chudleigh Fort to lay the Council's Wreath at the War Memorial and guests are invited to continue with the Civic Party for this Ceremony. The Town Mayor will appreciate your support at these ceremonies.
ABOVE ALL...

Available from F Colwill, Allhalland Street, Bideford. WITHOUT THIS SUPPORT THE ROYAL BRITISH LEGION COULD NOT CONTINUE ITS WORK.
The Chairman would be pleased to receive donations to support the work of the Royal British Legion.
Chairman Local Appeal: Mr J Sinclair, 32 Geneva Place, Bideford. We would like to thank Messrs Braddicks for their generosity in donating this space