Still thinks our pace ‘too slow' 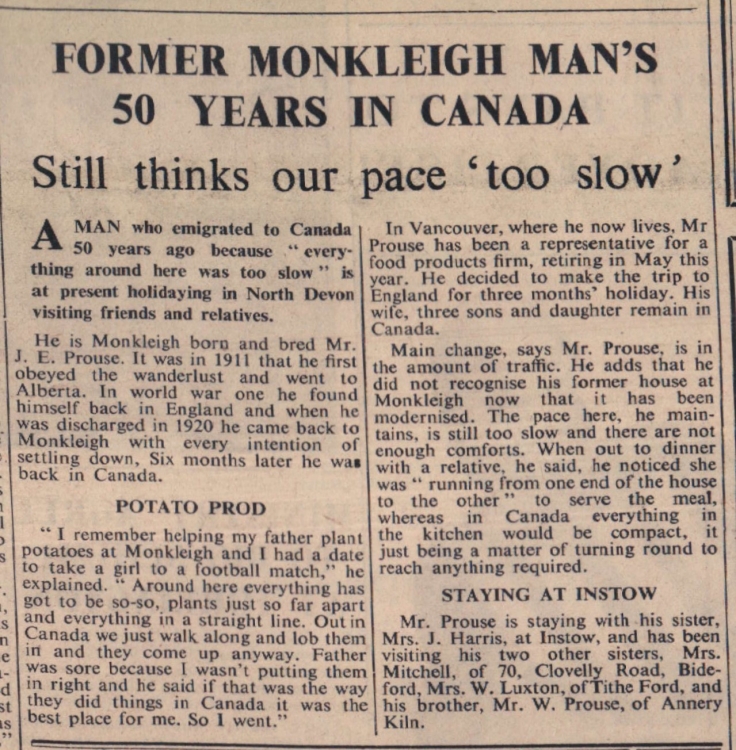 A man who emigrated to Canada 50 years ago because ‘everything around here was too slow’ is at present holidaying in North Devon visiting friends and relatives.

He is Monkleigh born and bred Mr J E Prouse. It was in 1911 that he first obeyed the wanderlust and went to Alberta. In world war one he found himself back in England and when he was discharged in 1920 he came back to Monkleigh with every intention of settling down. Six months later he was back in Canada.

In Vancouver, where he now lives, Mr Prouse has been a representative for a food products firm, retiring in May this year. He decided to make the trip to England for three months’ holiday. His wife, three sons and daughter remain in Canada.

Mr Prouse is staying with his sister, Mrs J Harris, at Instow, and has been visiting his two other sisters, Mrs Mitchell, of 70 Clovelly Road, Mrs W Luxton, of Tithe Ford, and his brother, Mr W Prouse, of Annery Kiln.