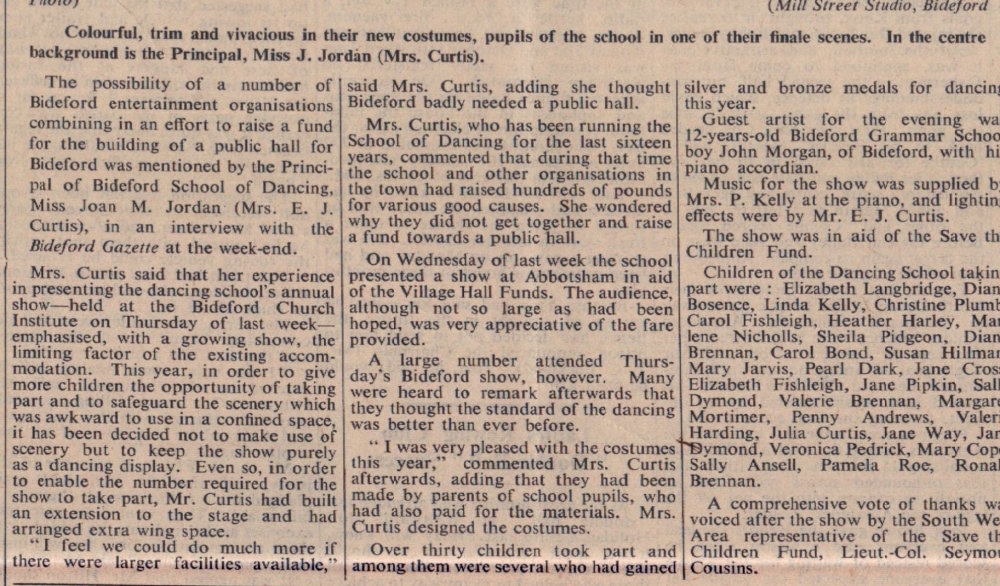 Colourful, trim and vivacious in their new costumes, pupils of the school is one of their finale scenes. In the centre background is the Principal, Miss J Jordan (Mrs Curtis).

The possibility of a number of Bideford entertainment organisations combining in an effort to raise a fund for the building of a public hall for Bideford was mentioned by the Principal in an interview with the Bideford Gazette at the weekend.

On Wednesday of last week the school presented a show at Abbotsham in aid of the Village Hall Funds.

A large number attended Thursday’s Bideford show. Many were heard to remark afterwards that they thought the standard of the dancing was better than ever before.

Over thirty children took part and among them were several who had gained silver and bronze medals for dancing this year.

Guest artist for the evening was 12 years old Bideford Grammar School boy John Morgan, of Bideford, with his piano accordian.

Music for the show was supplied by Mrs P Kelly at the piano, and lighting effects were by Mr E J Curtis.

The show was in aid of the Save the Children Fund.

A comprehensive vote of thanks was voiced after the show by the South West Area representative of the Save the Children Fund, Lieut-Col Seymour Cousins.