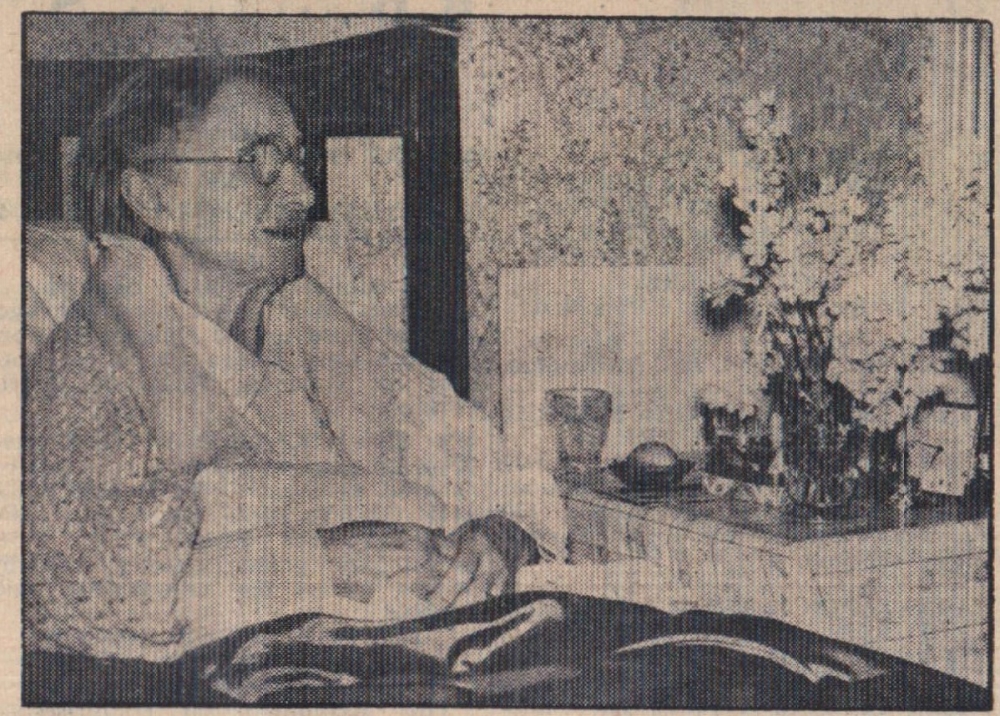 Keeps abreast with the news.

Links with Kingsley, sailing ships and commonwealth. It is always a pleasure to pay a visit to Mrs Barrow who, now in her 99th year, is the oldest Bidefordian. Always there is a cheery greeting, and a genuine interest in every day affairs.

‘Aunt Jinny’ as she is affectionately known to her many friends and by her relations scattered over the world, now resides with Mrs Durant, of Darracott, Abbotsham Road, to whom she is related by marriage. Though afflicted by deafness, Mrs Barrow is in all other respects in excellent health, able to look after herself, and to dress and come downstairs when she feels inclined.

Her memory is very good and she reads the news every day, one novel a week at least, and, as the oldest subscriber to the Bideford Gazette, takes a special interest when Friday’s issue comes round, and regularly sends it off to her son Robert, now a grandfather and retired, living in Toronto.

Longevity is not unknown in Mrs Barrow’s family for her grandfather was in his 100th year when he died. As a preventative officer he was sent down to Clovelly to counteract some local smuggling reported to be going on, and while living there her father, the late Capt G Jacob, as a boy was a friend of Charles Kingsley, the son of Clovelly’s rector, and used to go on birds-nesting expeditions with him.

Mrs Barrow was christened Jane, and her birth is recorded on December 13th 1857 at Bideford, the daughter of George and Matilda (nee Rapson) Jacob, of Bideford. In her early days her parents lived at Bridgeland Street, in a house now forming part of Mrs Laycock’s house. Her father was a sea captain and sailed the world over, a favourite run being to Australia with passengers and cargo.

She is the only surviving child of a family of 12, and in 1881 she married Robert, son of Mr and Mrs Barrow, who owned Torridge House, East-the-Water, now built over, where they ran a local brewery.

For a time the young couple lived at Trafalgar House, but Mr Barrow junr, died when only 30 and left a young widow with one child, Robert. Mrs Barrow later went to Ilfracombe to join her friends the Stephens’ who ran a drapery business there for many years. About 12 years ago, when living alone at Ilfracombe, she accepted the kind invitation of Mrs Durant to come and stay with her, where she has been very happy ever since.

Robert, her son, after training with Mr Hookway, father of the late Mr R E L Hookway, former Borough Surveyor at Bideford, subsequently went to Canada. He married a Miss Daisy Clark, of Bideford Post-office staff, and now has two daughters, both married, and two grandchildren, a boy and a girl. Many years ago, Mrs Barrow paid an extended visit to her son at Toronto.

Last summer and for some years past, Mrs Barrow has enjoyed a month’s summer holiday with her nephew and his wife, Mr and Mrs George Jacob and her niece, Miss Jacob, at Parkham. Another niece close at hand is Mrs Nicholls, at Abbotsham, and as mentioned earlier, others spread out to Malaya, Australia, South Africa and Vancouver and Toronton. 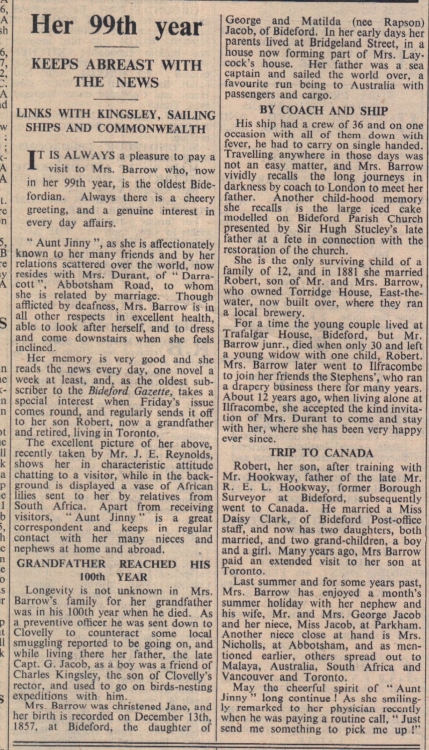