A notable family association with Bideford Grammar School, stretching over the past 18 years, ended when the school broke up for its summer vacation.

The family is that of Mr and Mrs George Polley, 8 Kenwith Terrace, Northam Road, Bideford, who have three sons and two daughters. Since 1945 there had been a Polley on the register at the Grammar School.

All three sons – Michael, John and Robin – took a leading part in all spheres of school life and their schooldays seemed to follow a similar prominent pattern.

Mr and Mrs Polley’s daughters are Ann, who is married to a university lecturer and also lives in Canada, and Janet, who is shortly to join her sister in Canada. By coincidence, Shebbear College has just broken a very similar link lasting 19 years with the departure of the last of the four Venner brothers.

The eldest of the brothers, Robert, joined the school in 1944. Now aged 30 he farms at Tiverton. Next to join was Norman, now 24 and a public health official with Northam Council. Then came Colin, now 22, and a trainee-auctioneer at Taunton. The last in the line, 17 year old Alan, was presented with a Methodist hymn book when the term ended to mark the long association between the brothers and the school. 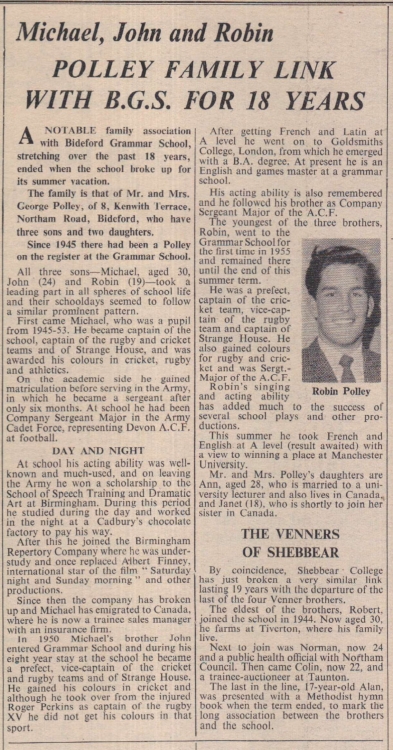