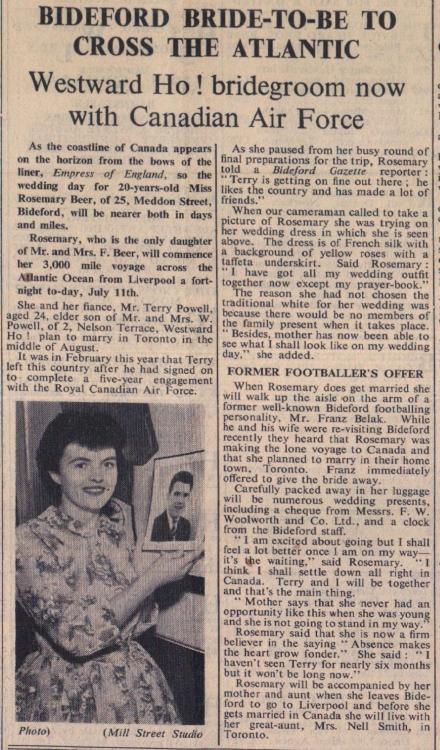 As the coastline of Canada appears on the horizon from the bows of the liner, Empress of England, so the wedding day for 20 years old Miss Rosemary Beer, 25 Meddon Street, Bideford, will be nearer both in days and miles.
Rosemary, who is the only daughter of Mr and Mrs F Beer, will commence her 3,000 mile voyage across the Atlantic Ocean from Liverpool, a fortnight today, July 11th.
She and her fiancé, Mr Terry Powell, aged 24, elder son of Mr and Mrs W Powell, 2 Nelson Terrace, Westward Ho! plan to marry in Toronto in the middle of August.
When Rosemary does get married she will walk up the aisle on the arm of a former well-known Bideford footballing personality, Mr Franz Belak.
Carefully packed away in her luggage will be numerous wedding presents, including a cheque from Messrs F W Woolworth and Co Ltd, and a clock from the Bideford staff.
Rosemary will be accompanied by her mother and aunt when she leaves Bideford to go to Liverpool and before she get married in Canada, she will live with her great-aunt, Mrs Nell Smith, in Toronto.
Full Gazette article dated 27 June 1958