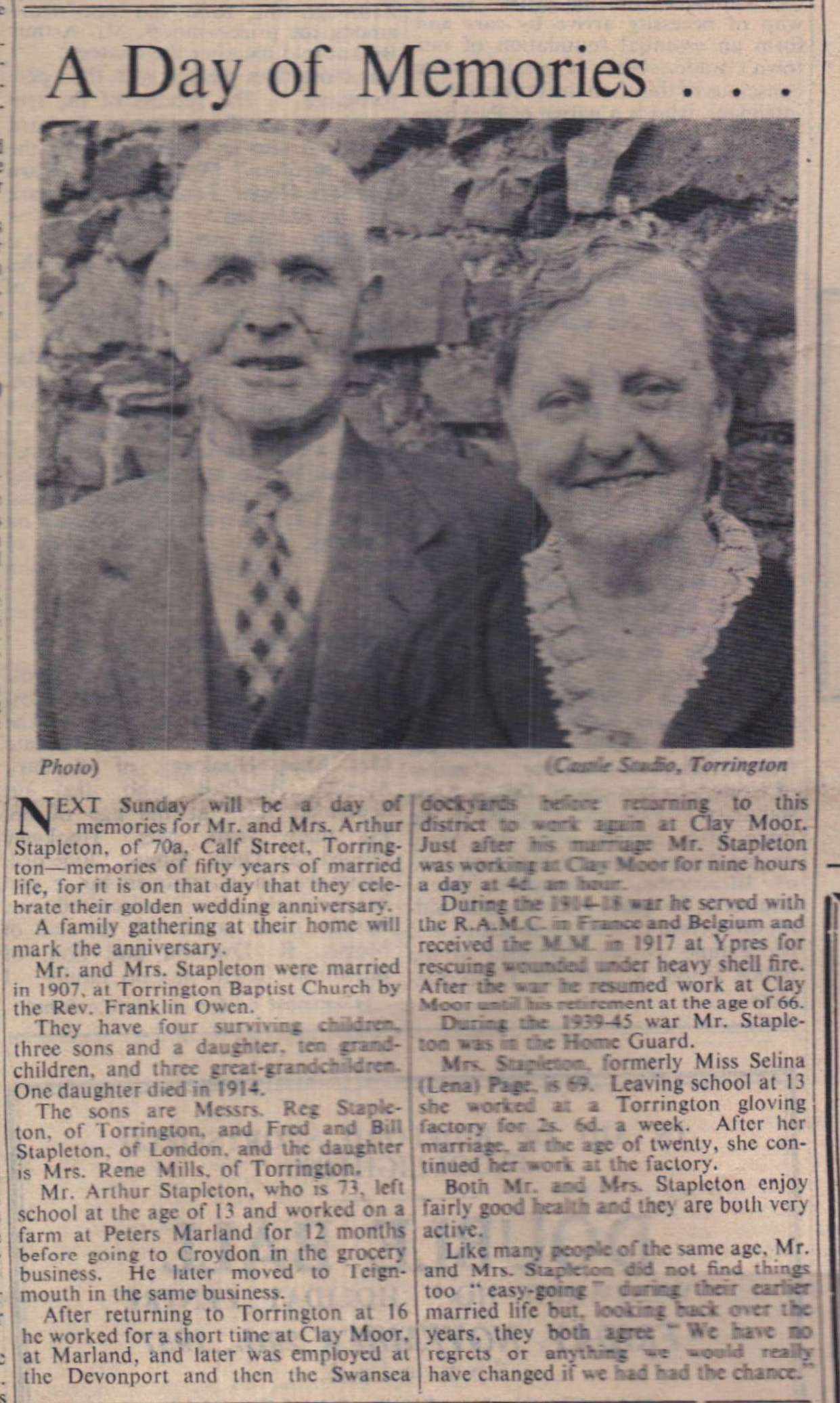 A Day of Memories...

Next Sunday will be a day of memories for Mr and Mrs Arthur Stapleton, of 70a Calf Street, Torrington - memories of fifty years of married life, for it is on that day that they celebrate their golden wedding anniversary.
A family gathering at their home will mark the anniversary.
Mr and Mrs Stapleton were married in 1907, at Torrington Baptist Church by the Rev. Franklin Owen.
They have four surviving children, three sons and a daughter, ten grandchildren and three great-grandchildren. One daughter died in 1914.
The sons are Messrs Reg Stapleton, of Torrington, and Fred and Bill Stapleton of London, and the daughter is Mrs Rene Mills, of Torrington.
Mr Arthur Stapleton, who is 73, left school at the age of 13 and worked on a farm at Peters Marland for 12 months before going to Croydon in the grocery business. He later moved to Teignmouth in the same business.
After returning to Torrington at 16 he worked for a short time at Clay Moor, at Marland and later was employed at the Devonport and then the Swansea dockyards before returning to this district to work again at Clay Moor. Just after his marriage, Mr Stapleton was working at Clay Moor for nine hours a day at 4d. an hour.
During the 1914-18 war he served with the R.A.M.C in France and Belgium and received the M.M. in 1917 at Ypres for rescuing wounded under heavy shell fire. After the war he resumed work at Clay Moor until his retirement at the age of 66.
Mrs Stapleton, formerly Miss Selina (Lena) Page, is 69. Leaving school at 13 she worked at a Torrington gloving factory for 2s 6d a week. After her marriage, at the age of twenty, she continued her work at the factory.
Both Mr and Mrs Stapleton enjoy fairly good health and they are both very active.
Like many people of the same age, Mr and Mrs Stapleton did not find things too "easy going" during their earlier married life but, looking back over the years, they both agree "We have no regrets or anything we would really have changed if we had had the chance."