A Torrington radio and TV dealer, Mr Thomas Squire, of Castle Street, is proud of his family’s May Fair ‘tradition’. 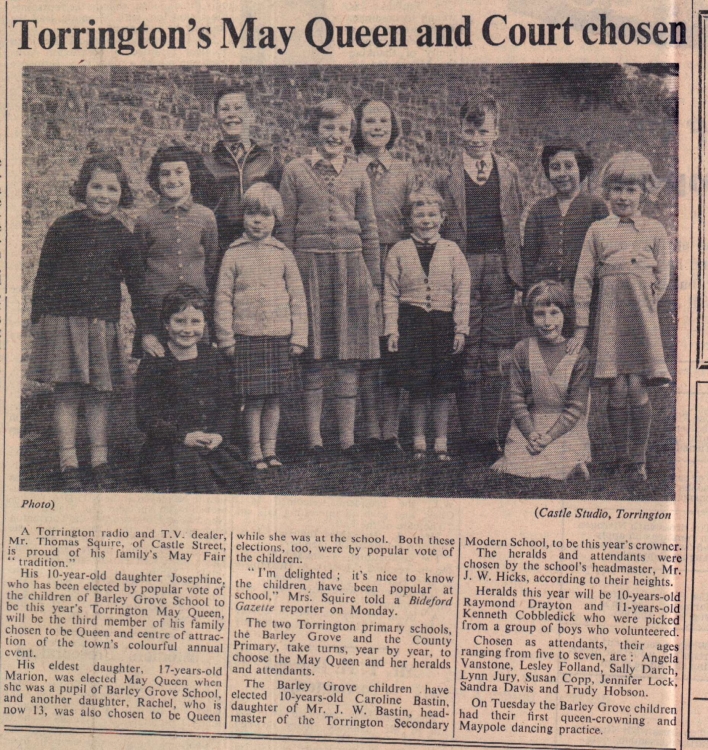 His 10 year old daughter Josephine, who has been elected by popular vote of the children of Barley Grove School to be this year’s Torrington May Queen, will be the third member of his family chosen to be Queen and centre of attraction of the town’s colourful annual event.
His eldest daughter, 17 years old Marion, was elected May Queen when she was a pupil of Barley Grove School, and another daughter, Rachel, who is now 13, was also chosen to be Queen while she was at the school.
The Barley Grove children have elected 10 years old Caroline Bastin, daughter of Mr J W Bastin, headmaster of the Torrington Secondary Modern School, to the this year’s crowner. The heralds and attendants were chosen by the school’s headmaster, Mr J W Hicks, according to their heights.
Heralds this year will be 10 years old Raymond Drayton and 11 years old Kenneth Cobbledick who were picked from a group of boys who volunteered.
Chosen as attendants their ages ranging from five to seven are: Angela Vanstone, Lesley Folland, Sally Darch, Lynn Jury, Susan Copp, Jennifer Lock, Sandra Davis and Trudy Hobson.
The full article is dated 7 March 1958