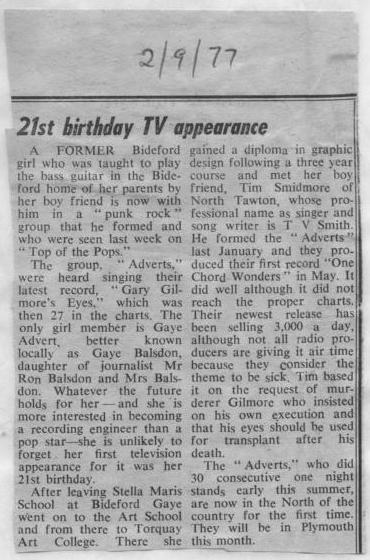 A former Bideford girl who was taught to play the bass guitar in the Bideford home of her parents by her boy friend is now with him in a 'punk rock' group that he formed and who were seen last week on 'Top of the Pops'. The group, 'Adverts' were heard singing their latest record, 'Gary Gilmore's Eyes' which was then 27 in the charts. The only girl member is Gaye Advert, better known locally as Gaye Balsdon, daughter of journalist Mr Ron Balsdon and Mrs Balsdon. Whatever the future holds for her = and she is more interested in becoming a recording engineer than a pop star - she is unlikely to forget her first television appearance for it was her 21st birthday.

After leaving Stella Maris School at Bideford Gaye went on to the Art School and from there to Torquay Art College. There she gained a diploma in graphic design following a three year course and met her boyfriend, Tim Smidmore of North Tawton, whose professional name as singer and song writer is T V Smith. He formed the 'Adverts' last January and they produced their first record 'One Chord Wonders' in May. It did well although it did not reach the proper charts. Their newest release has been selling 3,000 a day, although not all radio producers are giving it air time because they consider the theme to be sick. Tim based it on the request of murderer Gilmore who insisted on his own execution and that his eyes should be used for transplant after his death.

The 'Adverts' who did 30 consecutive one night stands early this summer, are now in the North of the country for the first time.
They will be in Plymouth this month.