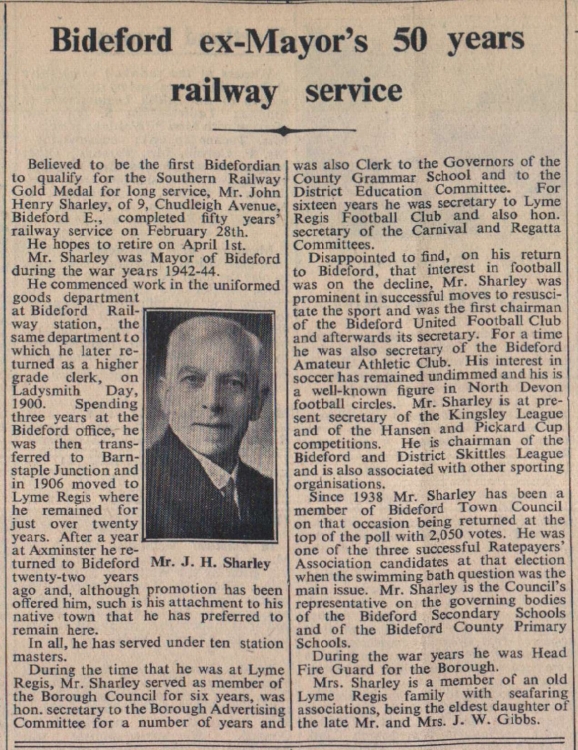 He hopes to retire on April 1st. Mr Sharley was Mayor of Bideford during the war years 1942-44.

He commenced work in the uniformed goods department at Bideford Railway station the same department to which he later returned as a higher grade clerk, on Ladysmith Day, 1900. In all he has served under ten station masters. Disappointed to find, on his return to Bideford, that interest in football was on the decline, Mr Sharley was prominent in successful moves to resuscitate the sport and was the first chairman of the Bideford United Football Club and afterwards its secretary. For a time he was also secretary of the Bideford Amateur Athletic Club. He is at present secretary of the Kingsley League and of the Hansen and Pickard Cup competitions. He is chairman of the Bideford and District Skittles League and is also associated with other sporting organisations. Since 1938 Mr Sharley has been a member of Bideford Town Council and is the Council’s representative on the governing bodies of the Bideford Secondary Schools and of the Bideford County Primary Schools. During the war years he was Head Fire Guard for the Borough. Mrs Sharley is a member of an old Lyme Regis family with seafaring associations, being the eldest daughter of the late Mr and Mrs J W Gibbs.