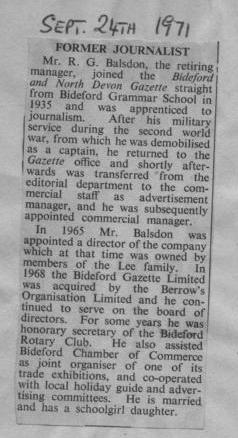 Mr R G Balsdon, the retiring manager, joined the Bideford and North Devon Gazette straight from Bideford Grammar School in 1935 and was apprenticed to journalism. After his military service during the second world war, from which he was demobilised as a captain, he returned to the Gazette office and shortly afterwards was transferred from the editorial department to the commercial staff as advertisement manager, and he was subsequently appointed commercial manager.
In 1965 Mr Balsdon was appointed a director of the company which at that time was owned by members of the Lee family. In 1968 the Bideford Gazette Limited was acquired by the Berrow's Organisation Limited and he continued to serve on the board of directors. For some years he was honorary secretary of the Bideford Rotary Club. He also assisted Bideford Chamber of Commerce as joint organiser of one of its trade exhibitions, and co-operated with local holiday gude and advertising committees, He is married, and has a schoolgirl daughter.