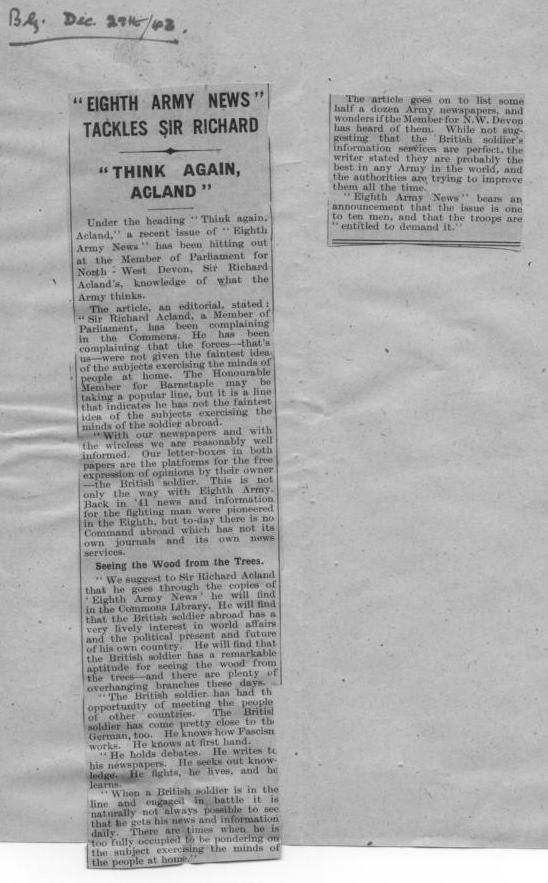 Under the heading 'Think again, Acland,' a recent edition of 'Eighth Army News' has been hitting out at the Member of Parliament for North-West Devon, Sir Richard Acland's knowledge of what the Army thinks. The article, an editorial, stated: 'Sir Richard Acland, a Member of Parliament, has been complaining in the Commons. He has been complaining that the forces - that's us - were not given the faintest idea of the subjects exercising the minds of the people at home. The Honourable Member for Barnstaple may be taking a popular line that indicates he has not the faintest idea of the subjects exercising the minds of the soldier abroard.
'With our newspapers and with the wireless we are reasonably well informed. Our letter-boxes in both papers are the platforms for the free expression of opinions by their owner - the British soldier. This is not only the way with Eighth Army. Back in '41 news and information for the fighting man were pioneered in the Eighth, but today there is no Command abroad which has not its own journals and its own news services.

Seeing the Wood from the Trees

'We suggest to Sir Richard Acland that he goes through the copies of 'Eighth Army News' he will find in the Commons Library. He will find that the British soldier abroad has a very lively interest in world affairs and the political present and future of his own country. He will find that the British soldier has a remarkable aptitude for seeing the wood from the trees - and there are plenty of overhanging branches these days. The British soldier has had the opportunity of meeting people of other countries. The British soldier has come pretty close to the German, too. He knows how Fascism works. He knows at first hand. He holds debates. He writes to his newspapers. He seeks out knowledge. He fights, he lives, and he learns. When a British soldier is in the line and engaged in battle it is naturally not always possible to see that he gets his news and information daily. There are times when he is too fully occupied to be pondering on the subject exercising the minds of the people at home.

The article goes on to list some half a dozen Army newspapers, and wonders if the Member of N.W. Devon has heard of them. While not suggesting that the British soldier's information services are perfect, the writer stated that they are probably the best in any Army in the world, and the authorities are trying to improve them all the time. 'Eighth Army News; bears an announcement that the issue is one to ten men, and that the troops are 'entitled to demand it.'