The Braunds of Bucks and Elsewhere 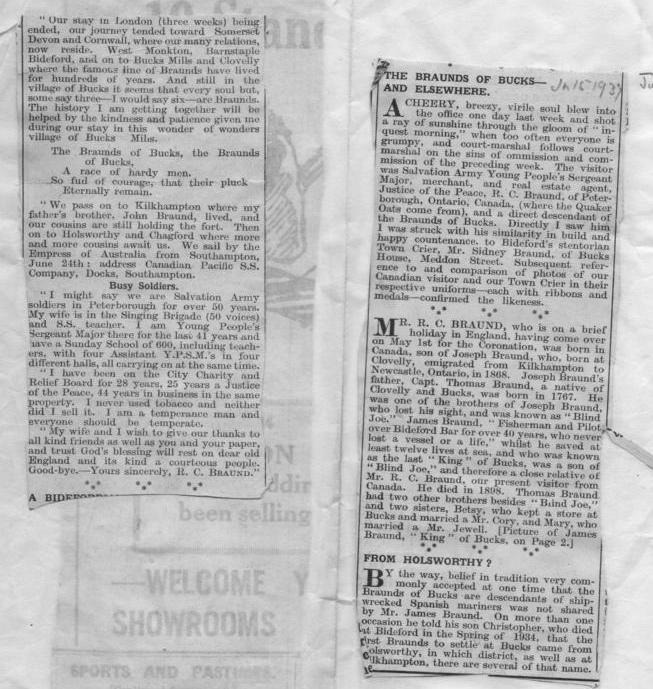 A cheery, breezy, virile soul blew into the office one day last week and shot a ray of sunshine through the gloom of 'inquest morning', and court-marshal follows court-marshal on the sins of ommission and commission of the preceding week. The visitor was Salvation Army Young People's Sergeant Major, merchant, and real estate agent, Justice of the Peace, R C Braund of Peterborough, Ontario, Canada (where the Quaker Oats come from), and a direct descendant of the Braunds of Bucks. Directly I saw him I was struck with his similarity in build and happy countenance to Bideford's stentorian Town Crier, Mr Sidney Braund, of Bucks House, Meddon Street. Subsequent reference to and comparison of photos of our Canadian visitor and our Town Crier in their respective uniforms -
each with ribbons and medals - confirmed the likeness.

Mr R C Braund, who is on a brief holiday in England, having come over on May 1st for the Coronation, was born in Canada, son of Joseph Braund, who, born at Clovelly, emigrated from Kilkhampton to Newcastle, Ontario, in 1868. Joseph Braund's father, Capt. Thomas Braund, a native of Clovelly and Bucks, was born in 1767. He was one of the brothers of Joseph Braund, who lost his sight, and was known as 'Blind Joe.' James Braund, 'fisherman and pilot over Bideford Bar for over 40 years, who never lost a vessel or a life,' whilst he saved at least twelve lives at
sea, and who was known as the last 'King' of Bucks, was a son of 'Blind Joe' and therefore a close relative of Mr R C Braund, our present visitor from Canada. He died in 1808. Thomas Braund had two other brothers besides 'Blind Joe' and two sisters, Betsy, who kept a store at Bucks and married a Mr Cory, and Mary, who married a Mr Jewell.

By the way, belief in tradition very commonly accepted at one time that the Braunds of Bucks are descendants of shipwrecked Spanish mariners was not shared by Mr James Braund. On more than one occasion he told his son Christopher, who died at Bideford in the spring of 1934, that the first Braunds to settle at Bucks came from Holsworthy in which district, as well as at Kilkhampton, there are several of that name. 'Our stay in London (three weeks) being ended, our journey tended toward Somerset, Devon and Cornwall, where our many relations now reside. West Monkton, Barnstaple, Bideford and on to Bucks Mills and Clovelly where the famous line of Braunds have lived for hundreds of years. And still in the village of Bucks it seems that every soul but,
some say three - I would say six - are Braunds. The history I am getting together will be helped by the kindness and patience given me during our stay in the wonder of wonders village of Bucks Mills.

The Braunds of Bucks, the Braunds of Bucks, A race of hardy men, So full of courage that their pluck eternally remain. We pass on to Kilkhapmpton where my father's brother, John Bruand, lived, and our cousins are still holding the fort. Then on to Holsworthy and Chagford where more and more cousins await us. We sail by the Empress of Australia
from Southampton, June 24th: address Canadian Pacific SS Company, Docks, Southampton.

Busy Soldiers
'I might say we are Salvation Army soldiers in Peterborough for over fifty years. My wife is in the Singing Brigade (50 voices) and S.S teacher. I am Young People's Sergeant Major there for the last 41 years and have a Sunday School of 600, including teachers, with four Assistant Y.P.S.M's in four different halls, all carrying on at the same time. I have been on the City Charity and Relief Board for 28 years, 25 years a Justice of the Peace, 44 years in business in the same property. I never used tobacco and neither did I sell it. I am a temperance man and everyone should be a temperate man. My wife and I wish to give our thanks to all kind friends as well as you and your paper, and trust God's blessing will rest on dear old England and its kind a courteous people. Good-bye -
Yours sincerly, R C Braund