Residents of Hillcliff Terrace, Appledore, are reported to be annoyed because they claim that a new street sign ‘Irsha Street’ put up in the vicinity threatens their ‘independent existence’ and is likely to lead to confusion.

One of them told the Gazette they were contemplating sending a petition to Northam Urban Council about it. The attention of the Council officials, he said, had been drawn to the matter when the sign was being erected, but nothing had been done to alter it. In both the Ordnance Survey and the Electors’ List Hillcliff Terrace, which has a dozen houses, was mentioned separately and not with Irsha Street, he added.
The Clerk to Northam Urban Council, Mr Alan Gardner, said there no intention of removing use of the name Hillcliff Terrace but merely to indicate the extent of Irsha Street.
Late news is that although the new sign is to remain a Hillcliff Terrace name plate is to be put up as well. 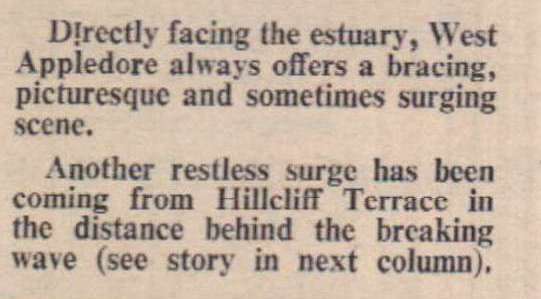