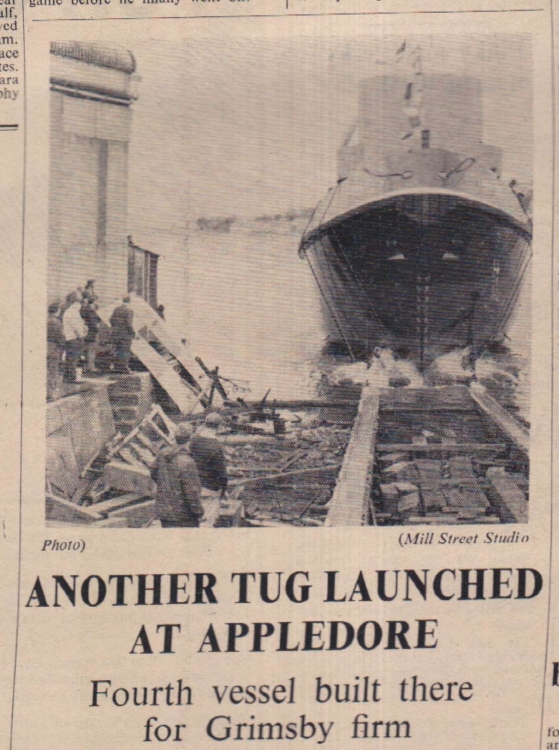 Just four months after her keel was laid, a new river and ocean going tug was launched on Thursday week at the yards of Appledore Shipbuilders Ltd. She was christened Lady Cecilia by Mrs M Parkes, wife of Mr Basil Parkes, former Sheriff of Hull, and one of the leading trawler and tug owners in the country.
The vessel is being built for the Grimsby towage and salvage firm of Messrs Piggott and is the second Lady Cecilia to be constructed for the company at the Appledore yards. The first launched some years ago is now serving in the waters around Singapore.
At the time the contract to build the new Lady Cecilia was announced the price quoted for her construction was £150,000. She is 106ft long and has a beam of 28ft. She is a twin-screw Diesel powered vessel and has two Ruston and Hornsby engines, each of 937 shaft horse power. She has accommodation for a crew of 10, which comprises a captain, chief engineer, two mates, and six deckhands, and is equipped with radar and echo-sounding equipment.
Work of fitting out the tug, the fourth vessel to be built for the Grimsby firm, began on Friday and will probably be completed in two months. Orders, which will keep the yard busy for some time include those for an Admiralty tug and a sandsucker.