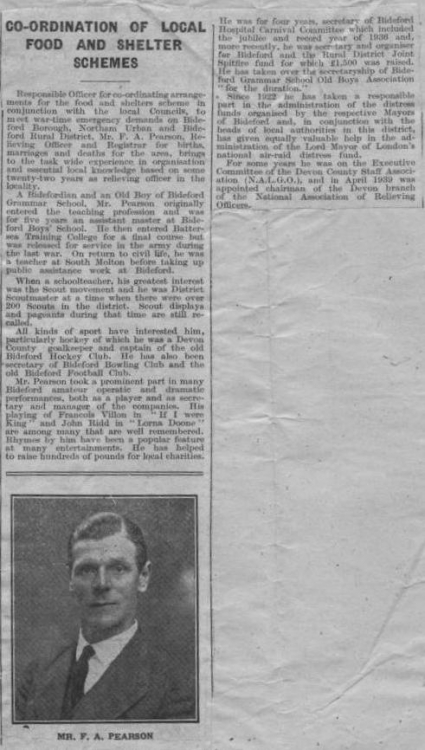 Responsible Officer for co-ordinating arrangements for the food and shelter schemes in conjunction with the local Councils, to meet war time emergency demands on Bideford Borough, Northam Urban and Bideford Rural District, Mr F A Pearson, Relieving Officer and Registrar for births, marriages and deaths for the area, brings to the task wide experience in organisation and essential local knowledge based on some twenty two years as relieving officer in the locality.
A Bidefordian and an Old Boy of Bideford Grammar School, Mr Pearson originally entered the teaching profession and was for five years an assistant master at Bideford Boys’ School. He then entered Battersea Training College for a final course but was released for service in the army during the last war. On return to civil life, he was a teacher at South Molton before taking up public assistance work at Bideford.
When a schoolteacher, his greatest interest was the Scout movement and he was District Scoutmaster at a time when there were over 200 Scouts in the district. Scout displays and pageants during that time are still recalled.
All kinds of sport have interested him, particularly hockey of which he was a Devon County goalkeeper and captain of the old Bideford Hockey Club. He has also been the secretary of Bideford Bowling Club and the old Bideford Football Club.
Mr Pearson took a prominent part in many Bideford amateur operatic and dramatic performances, both as a player and as secretary and manager of the companies. He has helped to raise hundreds of pounds for local charities. He was for four years, secretary of Bideford Hospital Carnival Committee which included the jubilee and record year of 1936 and, more recently, he was secretary and organiser for Bideford and the Rural District Joint Spitfire Fund for which £1,500 was raised. He has taken over the secretaryship of Bideford Grammar School Old Boys Association for the duration.
Since 1922 he has taken a responsible part in the administration of the distress funds organised by the respective Mayors of Bideford and, in conjunction with the heads of local authorities in this district, has given equally valuable help in the administration of the Lord Mayor of London’s national air-raid distress fund.
For some years he was on the Executive Committee of the Devon County Staff Association and in April 1939 was appointed chairman of the Devon branch of the National Association of Relieving Officers.