A member of Bideford Town Council Mr A I Rogers, dropped a bombshell when without any previous intimation he announced at yesterday’s meeting of the Council that he was resigning his membership immediately. 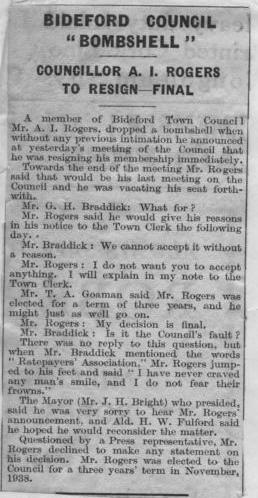 Towards the end of the meeting Mr Rogers said that would be his last meeting on the Council and he was vacating his seat forthwith.
Mr G H Braddick: What for?
Mr Rogers said he would give his reasons in his notice to the Town Clerk the following day.
Mr Braddick: We cannot accept it without a reason.
Mr Rogers: I do not want you to accept anything. I will explain in my note to the Town Clerk.
Mr T A Goaman said Mr Rogers was elected for a term of three years, and he might just as well go on.
Mr Rogers: My decision is final.
Mr Braddick: Is it the Council’s fault?
There was no reply to this question, but when Mr Braddick mentioned the words ‘Ratepayers’ Association’ Mr Rogers jumped to his feet and said ‘I have never craved any man’ smile, and I do not fear their frowns’.
The Mayor, Mr J H Bright, who presided, said he was very sorry to hear Mr Rogers’ announcement and Ald H W Fulford said he hoped he would reconsider the matter. Questioned by a Press representative, Mr Rogers declined to make any statement on his decision. Mr Rogers was elected to the Council for a three years term in November 1938.