Next month Mr Robert de Stapledon Stapledon, youngest son of the late Mr E A Stapledon and of Mrs Stapledon, of Damerels, Northam, becomes Governor of the Eastern Region of Nigeria. 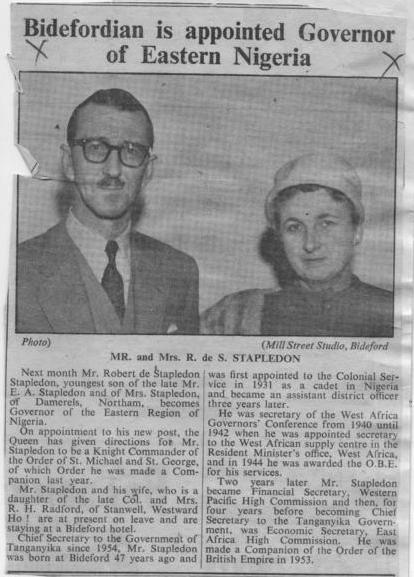 On appointment to his new post, the Queen has given direction for Mr Stapledon to be a Knight Commander of the Order of St Michael and St George, of which Order he was made a Companion last year.
Mr Stapledon and his wife, who is a daughter of the late Col and Mrs R H Radford, of Stanwell, Westward Ho! are at present on leave and are staying at a Bideford hotel.
Chief Secretary to the Government of Tanganyika since 1954, Mr Stapledon was born at Bideford 47 years ago and was first appointed to the Colonial Service in 1931 as a cadet in Nigeria and became an assistant district officer three years later. He was secretary of the West Africa Governers’ Conference from 1940 until 1942 when he was appointed secretary to the West African supply centre in the Resident Minister’s office, West Africa, and in 1944 he was awarded the OBE for his services. Two years later Mr Stapledon became Financial Secretary, Western Pacific High Commission and then, for four years
before becoming Chief Secretary to the Tanganyika Government, was Economic Secretary, East Africa High Commission.
He was made a Companion of the Order of the British Empire in 1953.