Miss Betty Stucley on her travels. 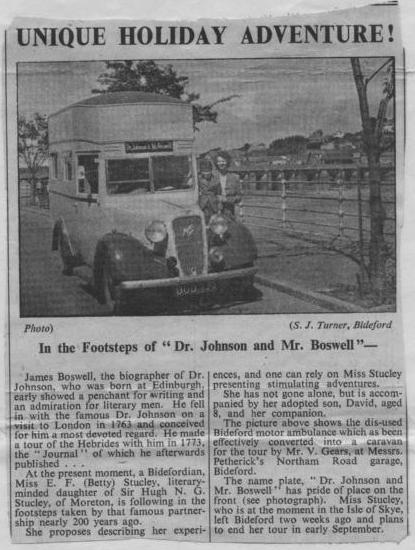 James Boswell, the biographer of Dr Johnson, who was born at Edinburgh, early showed a penchant for writing and an admiration for literary men. He fell in with the famous Dr Johnson on a visit to London in 1763 and conceived for him a most devoted regard. He made a tour of the Hebrides with him in 1773, the ‘Journal’ of which he afterwards published.
At the present moment, a Bidefordian, Miss E F (Betty) Stucley, literary minded daughter of Sir Hugh N G Stucley, of Moreton, is following in the footsteps taken by that famous partnership nearly 200 years ago. She proposes describing her experiences and one can rely on Miss Stucley presenting stimulating adventures. She has not gone alone, but is accompanied by her adopted son, David, aged 8, and her companion.
The picture shows the disused Bideford motor ambulance which has been effectively converted into a caravan for the tour by Mr V Gears, at Messrs Petherick’s Northam Road garage, Bideford.
The name plate ‘Dr Johnson and Mr Boswell’ has pride of place on the front. Miss Stucley, who is at the moment on the Isle of Skye, left Bideford two weeks ago and plans to end her tour in early September.