The deep sympathy of many friends is extended to Capt the Hon. Denys Scott and Mrs Lillian Scott, of the Holt, Appledore, in the death, as a result of enemy action in the South-East of England, of their youngest son, Anthony James Scott, aged 19, whose attractive personality had won him many friends. 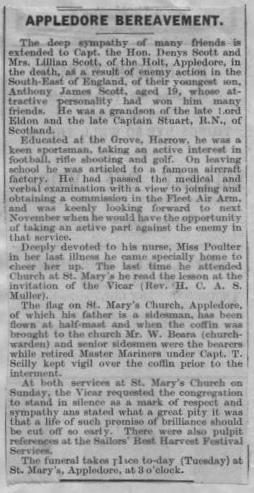 He was the grandson of the late Lord Eldon and the late Captain Stuart, RN, of Scotland.
Educated at the Grove, Harrow, he was a keen sportsman, taking an active interest in football, rifle shooting and golf. On leaving school he was articled to a famous aircraft factory. He had passed the medical and verbal examination with a view to joining and obtaining a commission in the Fleet Air Arm, and was keenly looking forward to next November when he would have the opportunity of taking an active part against the enemy in that service.
Deeply devoted to his nurse, Miss Poulter in her last illness he came specially home to cheer her up. The last time he attended Church at St Mary’s he read the lesson at the invitation of the Vicar, Rev H C A S Muller.
The flag on St Mary’s Church, Appledore, of which his father is a sidesman, has been flown at half-mast and when the coffin was brought to the church Mr W Beara (churchwarden) and senior sidesmen were the bearers while retired Master Mariners under Capt T Scilly kept vigil over the coffin prior to the interment.
At both services at St Mary’s Church on Sunday, the Vicar requested the congregation to stand in silence as a mark of respect and sympathy and stated what a great pity it was that a life of such promise of brilliance should be cut off so early. There were also pulpit references at the Sailors’ Rest Harvest Festival Services.
The funeral takes place today (Tuesday) at St Mary’s, Appledore, at 3o’clock