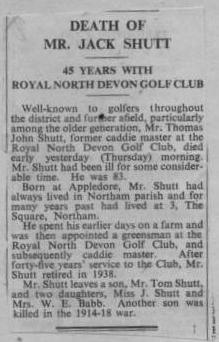 Well known to golfers throughout the district and further afield, particularly among the older generation, Mr Thomas John Shutt, former caddie master at the Royal North Devon Golf Club, died early yesterday (Thursday) morning. Mr Shutt had been ill for some considerable time. He was 83.
Born at Appledore Mr Shutt had always lived in Northam parish and for many years past had lived at 3 The Square, Northam. He spent his earlier days on a farm and was then appointed a greensman at the Royal North Devon Golf Club, and subsequently caddie master. After 45 years service to the Club, Mr Shutt retired in 1938.
Mr Shutt leaves a son, Mr Tom Shutt, and two daughters, Miss J Shutt and Mrs W E Babb. Another son was killed in the 1914-18 war.