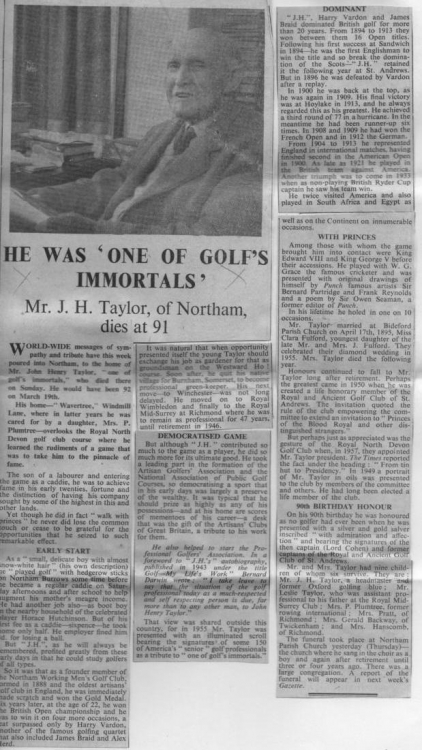 Worldwide messages of sympathy and tribute have this week poured into Northam to the home of Mr John Henry Taylor, ‘one of golf’s immortals’, who died there on Sunday. He would have been 92 on March 19th.

His home – ‘Wavertree’, Windmill Land, where in latter year he was cared for by a daughter, Mrs P Plumtree, overlooks the Royal North Devon golf club course where he learned the rudiments of a game that was to take him to the pinnacle of fame. The son of a labourer and entering the game as a caddie, he was to achieve fame in his early twenties, fortune and the distinction of having his company sought by some of the highest in this and other lands. Yet though he did in fact ‘walk with princes’ he never did lose the common touch or cease to be grateful for such opportunities that he seized to such a remarkable effect. As a ‘small, delicate boy with almost snow white hair’ (his own description) he ‘played golf’ with hedgerow sticks on Northam Burrows some time before he became a regular caddie on Saturday afternoons and after school to help augment his mother’s meagre income. He had another job also – as boot boy in the nearby household of the celebrated player Horace Hutchinson. But of his first fee as a caddie – a sixpence – he took home only half. His employer fined him 6d for losing a ball. But ‘JH’ as he will always be remembered, profited greatly from these early days in that he could study golfers of all types. So it was that as a founder member of the Northam Working Men’s Golf Club, formed in 1888 and the oldest artisans’ golf club in England, he was immediately made scratch and won the Gold Medal, six years later, at the age of 22, he won the British Open championship and he was to win it on four more occasions a feat surpassed only by Harry Vardon, another of the famous golfing quartet that also included James Braid and Alex Herd.

It was natural that when opportunity presented itself the young Taylor should exchange his job as gardener for that as groundsman on the Westward Ho! course. Soon after, he quit his native village for Burnham, Somerset, to become professional green keeper. His next move – to Winchester – was not long delayed. He moved on to Royal Wimbledon and finally to the Royal Mid-Surrey at Richmond where he was to remain as professional for 47 years until retirement in 1946.But although ‘JH’ contributed so much to the game as a player, he did so much more for its ultimate good. He took a leading part in the formation of the Artisan Golfers’ Association and the National Association of Public Golf Courses, so democratising a sport that in his early days was largely a preserve of the wealthy. It was typical that he should prize as highly as any of possessions – and at his home are scores of mementoes of his career – a desk that was the gift of the Artisans’ Clubs of Great Britain, a tribute to his work for them. He also helped to start the Professional Golfers’ Association. In a foreword to ‘JH’s’ autobiography, published in 1943 under the title ‘Golf – My Life’s Work’ Bernard Darwin wrote: ‘I take leave to say that the situation of the golf professional today as a much respected and self respecting person is due, for more than to any other man, to John Henry Taylor’. That view was shared outside this country, for in 1955 Mr Taylor was presented with an illuminated scroll bearing the signatures of some 150 of America’s ‘senior’ golf professionals as a tribute to ‘one of golf’s immortals’. ‘JH’, Harry Vardon and James Braid dominated British golf for more than 20 years. From 1894 to 1913 they won between them 16 Open titles. Following his first success at Sandwich in 1894 – he was the first Englishman to win the title and so break the domination of the Scots – ‘JH’ retained it the following year at St Andrews. But in 1896 he was defeated by Vardon after a replay. In 1900 he was back at the top, as he was again in 1909. His final victory was at Hoylake in 1913, and he always regarded this as his greatest. He achieved a third round of 77 in a hurricane. In the meantime he had been runner-up six times. In 1908 and 1909 he had won the French Open and in 1912 the German. From 1904 to 1913 he represented England in international matches, having finished second in the American Open in 1900. As last as 1921 he played in the British team against America. Another triumph was to come in 1933 when as non-playing British Ryder Cup captain he saw his team win. He twice visited America and also played in South Africa and Egypt as well as on the Continent on innumerable occasions.

Among those with whom the game brought him into contact were King Edward VIII and King George V before their accessions. He played with W G Grace the famous cricketer and was presented with original drawings of himself by Punch famous artists Sir Bernard Partridge and Frank Reynolds and a poem by Sir Owen Seaman, a former editor of Punch. In his lifetime he holed in one of 10 occasions.Mr Taylor married at Bideford Parish Church on April 17 1895, Miss Clara Fulford, youngest daughter of the late Mr and Mrs J Fulford. They celebrated their diamond wedding in 1955. Mrs Taylor died the following year. Honours continued to fall to Mr Taylor long after retirement. Perhaps the greatest came in 1950 when he was created a life honorary member of the Royal and Ancient Golf Club of St Andrews. The invitation quoted the rule of the club empowering the committee to extend an invitation to ‘Princes of the Blood Royal and other distinguished strangers’. But perhaps just as appreciated was the gesture of the Royal North Devon Golf Club when, in 1957, they appointed Mr Taylor president. The Times reported the fact under the heading ‘From tin hut to Presidency’. In 1949 a portrait of Mr Taylor in oils was presented to the club by members of the committee and others. He had long been elected a life member of the club. On his 90th birthday he was honoured as no golfer had ever been when he was presented with a silver and gold salver inscribed ‘with admiration and affection’ and bearing the signatures of the then captain (Lord Cohen) and former captains of the Royal and Ancient Golf Club of St Andrews.

Mr and Mrs Taylor had nine children of whom six survive. They are: Mr J H Taylor, a headmaster and former Oxford golfing blue; Mr Leslie Taylor, who was assistant professional to his father at the Royal Mid-Surrey Club; Mr P Plumtree, former rowing international; Mrs Pratt, of Richmond; Mrs Gerald Backway, of Twickenham; and Mrs Hanscombe, of Richmond.The funeral took place at Northam Parish Church yesterday (Thursday) – the church where he sang in the choir as a boy and again after retirement until three or four years ago. There was a large congregation.