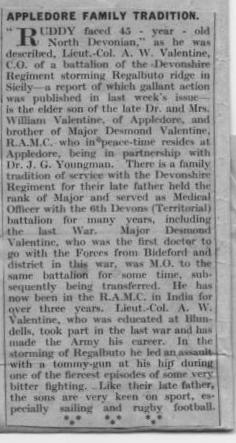 Lieut-Col A W Valentine, CO of a battalion of the Devonshire Regiment storming Regalbuto ridge in Sicily – a report of which gallant action was published in last week’s issue – is the elder son of the late Dr and Mrs William Valentine of Appledore, and brother of Major Desmond Valentine, RAMC, who in peace-time resides at Appledore, being in partnership with Dr J G Youngman.

There is a family tradition of service with the Devonshire Regiment for their late father held the rank of Major and served as Medical Officer with the 6th Devons (Territorial) battalion for many years, including the last War. Major Desmond Valentine, who was the first doctor to do with the Forces from Bideford and district in this war, was MO to the same battalion for some time, subsequently being transferred. He has now been in the RAMC in India for over three years, Lieut-Col A W Valentine, who was educated at Blundells, took part in the last war and has made the Army his career. In the storming of Regalbuto he led an assault with a tommy gun at his hip during one of the fiercest episodes of some very bitter fighting.

Like their father, the sons are very keen on sport, especially sailing and rugby football.