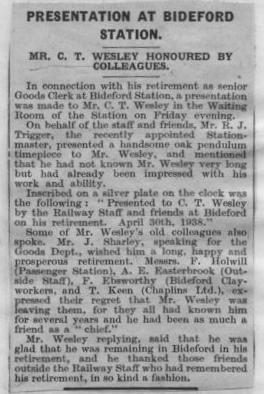 On behalf of the staff and friends, Mr R J Trigger, the recently appointed Stationmaster, presented a handsome oak pendulum timepiece to Mr Wesley and mentioned that he had not known Mr Wesley very long but had already been impressed with his work and ability. Inscribed on a silver plate on the clock was the following: “Presented to C T Wesley by the Railway Staff and friends at Bideford on his retirement. April 30th 1938”. Some of Mr Wesley’s old colleagues also spoke. Mr J Sharley, speaking for the Goods Department, wished him a long, happy and prosperous retirement. Messrs F Holwill (Passenger Station), A E Easterbrook (Outside Staff), F Ebsworthy (Bideford Clay workers) and T Keen (Chaplins Ltd) expressed their regret that Mr Wesley was leaving them, for they all had known him for several years and he had been as much a friends as a ‘chief’. Mr Wesley replying, said that he was glad he was remaining in Bideford in his retirement, and he thanked those friends outside the Railway Staff who had remembered his retirement, in so kind a fashion.