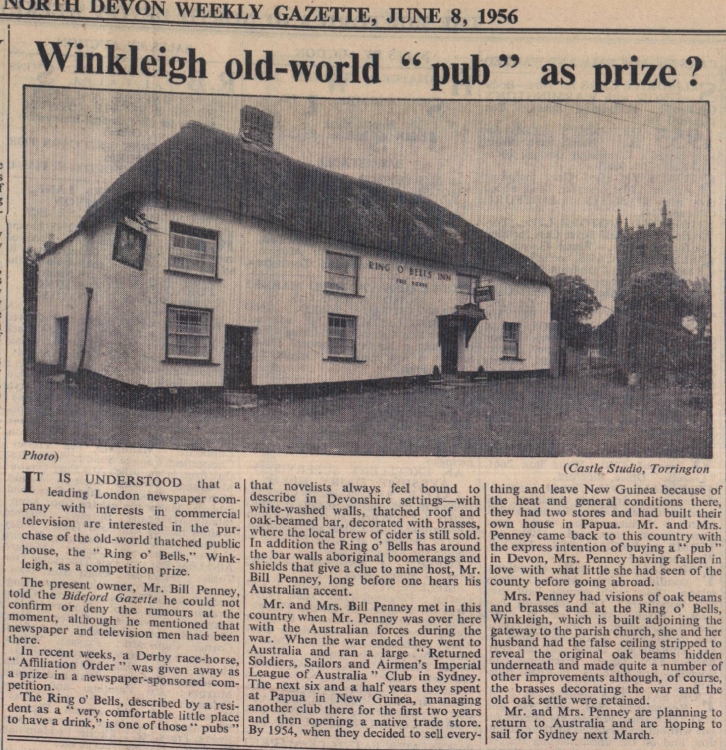 It is understood that a leading London newspaper company with interests in commercial television are interested in the purchase of the old-world thatched public house, the Ring O’ Bells, Winkleigh, as a competition prize.

The present owner, Mr Bill Penney, told the Bideford Gazette he could not confirm or deny the rumours at the moment, although he mentioned that newspaper and television men had been there.

In recent weeks, a Derby race-horse, ‘Affiliation Order’ was given away as a prize in a newspaper sponsored competition.

The Ring o’ Bells, described by a resident as a ‘very comfortable little place to have a drink’ is one of those ‘pubs’ that novelists always feel bound to describe in Devonshire settings – with white-washed walls, thatched roof and oak-beamed bar, decorated with brasses, where the local brew of cider is still sold. In addition the Ring o’ Bells has around the bar walls aboriginal boomerangs and shields that give a clue to mine host, Mr Bill Penney, long before one hears his Australian accent.

Mr and Mrs Bill Penney met in this country when Mr Penney was over here with the Australian forces during the war. When the war ended they went to Australia and ran a large ‘Returned Soldiers, Sailors and Airmen’s Imperial League of Australia’ Club in Sydney. The next six and a half years they spent at Papua in New Guinea, managing another club there for the first two years and then opening a native trade store. By 1954, when they decided to sell everything and leave New Guinea because of the heat and general conditions there, they had two stores and had built their own house in Papua. Mr and Mrs Penney came back to this country with the express intention of buying a ‘pub’ in Devon, Mrs Penney having fallen in love with what little she had seen of the country before going abroad.

Mrs Penney had visions of oak beams and brasses and at the Ring o’ Bells, Winkleigh, which is built adjoining the gateway to the parish church, she and her husband had the false ceiling stripped to reveal the original oak beams hidden underneath and made quite a number of other improvements although, of course, the brasses decorating the war and the old oak settle retained.

Mr and Mrs Penney are planning to return to Australia and are hoping to sail for Sydney next March.