Trips To Rome For Three 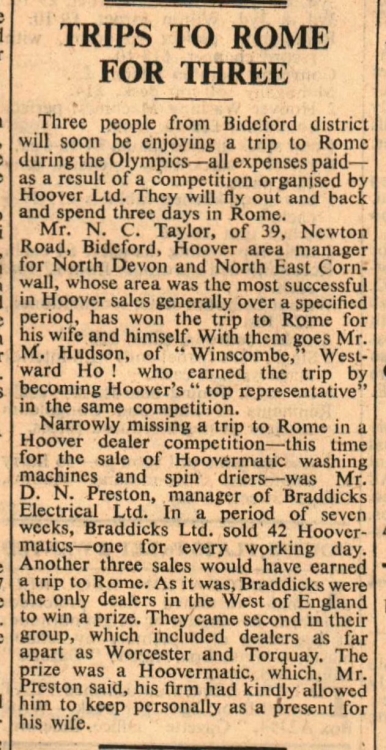 Three people from Bideford district will soon be enjoying a trip to Rome during the Olympics – all expenses paid – as a result of a competition organised by Hoover Ltd. They will fly out and back and spend three days in Rome.

Mr N C Taylor, 39 Newton Road, Bideford, Hoover area manager for North Devon and North East Cornwall, whose area was the most successful in Hoover sales generally over a specified period, has won the trip to Rome for his wife and himself. With them goes Mr M Hudson of ‘Winscombe’, Westward Ho! who earned the trip by becoming Hoover’s ‘top representative’ in the same competition.

Narrowly missing a trip to Rome in a Hoover dealer competition – this time for the sale of Hoovermatic washing machines and spin driers – was Mr D N Preston, manager of Braddicks Electrical Ltd. In a period of seven weeks, Braddicks Ltd sold 42 Hoovermatics – one for every working day. Another three sales would have earned a trip to Rome. As it was, Braddicks were the only dealers in the West of England to win a prize. They came second in their group, which included dealers as far apart as Worcester and Torquay. The prize was a Hoovermatic, which, Mr Preston said, his firm had kindly allowed him to keep personally as a present for his wife.