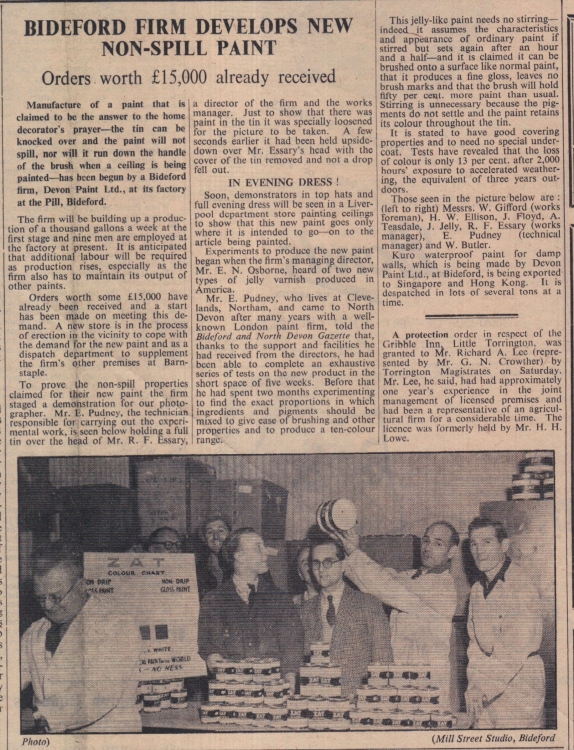 Manufacture of a paint that is claimed to be the answer to the home decorator’s prayer – the tin can be knocked over and the paint will not spill, nor will it run down the handle of the brush when a ceiling is being painted – has been begun by a Bideford firm, Devon Paint Ltd., at its factory at the Pill, Bideford.

The firm will be building up a production of a thousand gallons a week at the first stage and nine men are employed at the factory at present.

Orders worth some £15,000 have already been received and a start has been made on meeting this demand. A new store is in the process of erection in the vicinity to cope with the demand for the new paint and as a dispatch department to supplement the firm’s other premises at Barnstaple.

To prove the non-spill properties claimed the firm staged a demonstration. Mr E Pudney, the technician responsible for carrying out the experimental work, is seen holding a full tin over the head of Mr R F Essary, a director of the firm and the works manager.

Mr E Pudney, who lives at Clevelands, Northam, and came to North Devon after many years with a well known London paint firm, told the Bideford and North Devon Gazette that, thanks to the support and facilities he had received from the directors, he had been able to complete an exhaustive series of tests on the new product in the short space of five weeks.

Kuro waterproof paint for damp walls, which is being made by Devon Paint Ltd at Bideford is being exported to Singaport and Hong Kong.