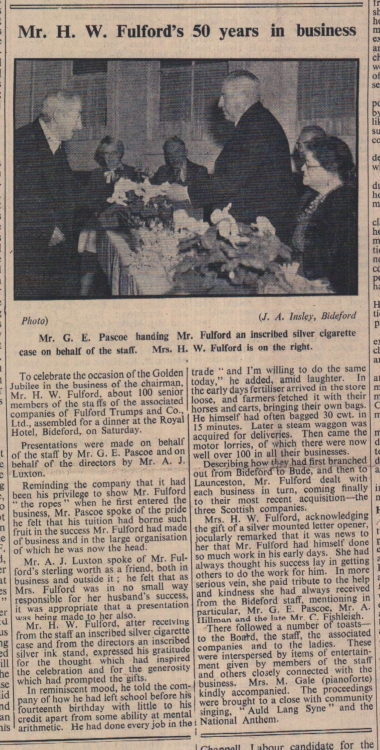 To celebrate the occasion of the Golden Jubilee in the business of the chairman, Mr H W Fulford, about 100 senior members of the staffs of the associated companies of Fulford Trumps and Co. Ltd, assembled for a dinner at the Royal Hotel, Bideford, on Saturday.

In reminiscent mood, he told the company of how he had left school before his fourteenth birthday with little to his credit apart from some ability at mental arithmetic. He had done every job in the trade ‘and I’m willing to do the same today’ he added, amid laughter.

Describing how they had first branched out from Bideford to Bude, and then to Launceston, Mr Fulford dealt with each business in turn, coming finally to their most recent acquisition – the three Scottish companies.

Mrs H W Fulford, acknowledging the gift of a silver mounted letter opener, jocularly remarked that it was news to her that Mr Fulford had himself done so much work in his early days. She had always thought his success lay in getting others to do the work for him. In more serious vein, she paid tribute to the help and kindness she had always received from the Bideford staff, mentioning in particular, Mr Pascoe, Mr A Hillman and the late Mr Fishleigh.