We believe that Northam Church had bells as early as the first half of the 16th century.

In 1549 most of the bells in Devon and Cornwall were dismantled as a punishment after the Prayer Book Rebellion. However the bells were not taken away as a 1553 inventory lists four bells in the tower, probably without their clappers. West Country bells were allowed to ring again from 1553 when Mary became Queen.

In 1562 an account was rendered “for the casting of our two bells”. It would seem that no attempt was made to rehang the original four bells as an amount of bell metal was sold in both 1578 and 1584.

The church accounts occasionally record payments to ringers for marking special occasions. In 1586 12d was paid for marking the anniversary of the accession of Queen Elizabeth 1st. In 1590 £5 was paid out for the recasting of a bell and purchase of a clapper. Also in this year another 459lbs of bell metal was sold. In 1592 John Harris was paid 12d for a day’s work on the bells, with John Hopper receiving 10d “to attend him”. 3d was spent on “meat and drink to them that help to truss the bells”. In 1715, the money paid to the ringers to mark King George 1st’s anniversary of accession amounted to 6s. On the same anniversary in 1717 they were paid 2s 6d with 1s 6d worth of “beear”. The payment for marking November 5th in both those years was much higher, amounting to 16s.

By 1745 the peal had increased to five and in 1770 it was recast into six by bell-founder Thomas Bilbie of Cullompton.

The dedications on the “Bilbie Bells” were as follows:

On August 20th 1770 the following set of rules was posted in the belfry:

“We ring the quick to church the dead to grave.
Good is our use, such usage let us have.
He that shall curse or swear or in a choleric mood,
Shall strike another, tho he draw no blood,
That ring in hat or spur or overturn a bell
Or by unskilful ringing mars a peal
He shall pay sixpence for each single crime,
Twill make him caution gainst another time”.

Revd. I H Gossett, vicar from 1844-1870, kept a record of the restoration of what was by now St Margaret’s Church. 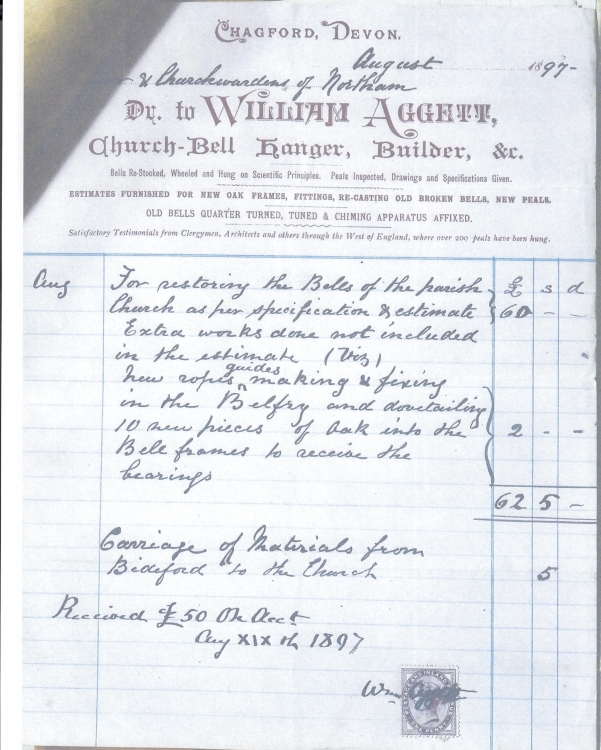 In the minutes of the Parochial Church Council meeting of February 13th 1919, the Vicar proposed that a sale of work, involving the co-operation of the Non-Conformists, should be held in August; he also suggested concerts at Westward Ho!, these events to raise funds for the re-hanging of the bells and adding two more. This proposal was seconded “in several places” and passed unanimously.

Two estimates were placed before the PCC in April 1919, one for £647 and another for more than £700. Mrs Wilson Hoare has consented to act as Secretary to the bell fund; she would be asked to approach various bodies with a view to their taking stalls at the proposed fund-raising events.

A Parish Meeting regarding the bells was held on September 9th 1919 and reported on at the PCC meeting two days later. The Fete had been a great success and the total receipt amounted to £482-2-9d. One of the committee had offered to become a guarantor for the sum required to complete the total amount. However, since the meeting the full amount had been reached due to further donations, one of £150 being from an anonymous donor. It was suggested that the striking apparatus on the clock be put right at the same time as the work on the bells in order to save expense. 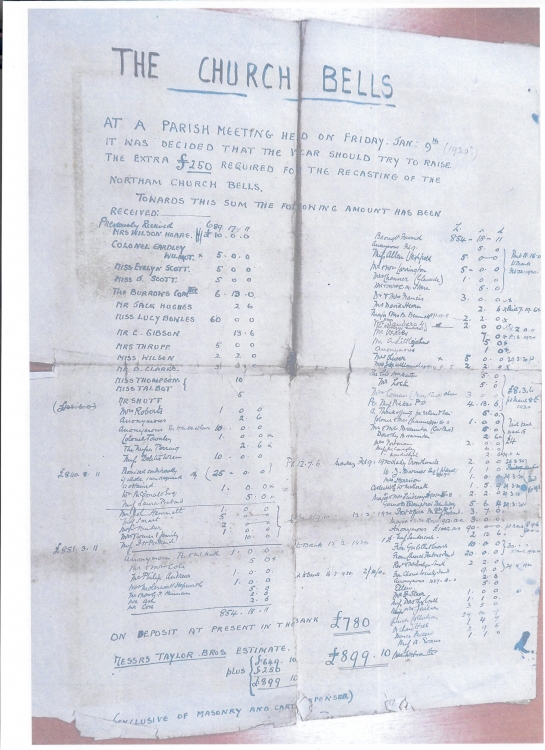 Moving on to January 8th 1920, a letter from Messrs Taylor & Co was read to the PCC by the Vicar. They state that £250 more would be needed to put the bells in proper tune. It was proposed by Dr Francis and seconded by Mr Penhorwood that a letter be sent to ask Taylors why they did not detect fallacies before removing the bells, as the PCC considers the extra charge to be extortionate. A reply to this letter was received and read to the next PCC meeting on February 12th 1920. In it Taylors state that they do not think the extra charge is extortionate. It is impossible to correctly detect fallacies until the bells are tested at the works. Also, transport and wages costs are rising. 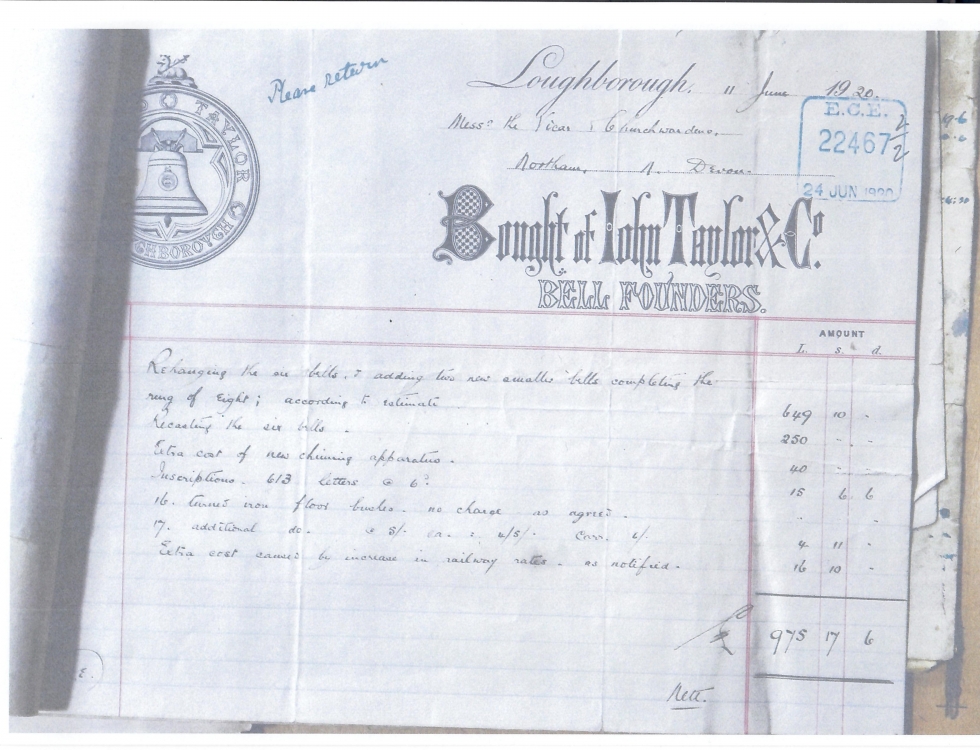 The Vicar announced that £827 is in hand to cover the cost of the bells and a further £25 has been promised by the Ecclesiastical Commissioners when £900 had been obtained. He urged the necessity of raising £1000 in order to cover incidental expenses.

It was decided that the inscriptions on the old bells should be transferred to the new ones, with the addition of the names of the present Vicar and Churchwardens.

On Saturday July 3rd 1920, the Northam Bells Festival took place on Vicarage Meadow and the Vicarage Lawn. The bells were rung throughout the afternoon until 8pm.

Admission to the events on the Meadow was 6d, with schoolchildren being charged 1d. As well as the usual sack races and tug of war, there were to be pillow fights and potato races. A refreshment stall offered ices etc at reasonable prices. Dancing was to take place on the lawn from 8.30pm-10.30pm at a charge of 6d, fancy dress optional. Due to inclement weather, the outdoor sports had to be postponed; the tea and the dance both took place in the schoolroom.

On Sunday July 4th the bells were dedicated. The service was performed by the Very Revd. Dean of Windsor, Dr C W Baillie, Chaplain to the King. His presence is explained by the fact that the living of Northam is in the gift of the Dean and Canons of Windsor. The dedications on the two new bells were;

Treble: To the Glory of God, in memory of E Stella Temple 1919
Second: In memory of George Brayley Brayley died 1915

The cost of recasting and rehanging the bells, with repairs to the tower, has cost about £1,100 and by the day of the dedication almost the whole amount had been raised.

At a meeting of the PCC on July 8th 1920 Mr Cecil Smith reported his satisfaction with the manner in which the work in the tower had been carried out. He recommended acceptance of the bells, the final charge appearing reasonable. A floor in which rope-guides had been inserted had been placed above the ringing chamber. Mr Penhorwood, on behalf of the ringers, said that the guides were too high but was told that the position had been selected by the bell-hangers’ foreman. The possibility of bracketing guides at a lower level might be considered.

In the Bideford Gazette of 27th September 1920 a letter writer signing himself “a Resident of Northam” strikes a sour note. He complains that, having been led to believe that the bells would be rung to the glory of God and the joy of mankind, instead all they are hearing is “Ding Dong” and “1,2,3,4,5,6,7,8” over and over again from 7.30 in the morning throughout the day. He goes on to say that “surely there should be some consideration for those who have to study, read and write” and he suggests a bye-law should be passed to prevent what he refers to as “street noises”. Allowing for some exaggeration one can only assume that he does not realise how many hours of practice it takes to become a safe and proficient bell-ringer!

It is to be hoped that he enjoyed the visit by ringers from the Devonshire Guild on September 15th 1921, when a peal of Kent Treble Bob Major was rung, consisting of 5088 changes and taking three hours and thirteen minutes. It is recorded as the first peal on the new bells.

At a PCC meeting on October 14th 1920 the question of the summary dismissal of one of the ringers was discussed. Mr T Williams had been dismissed by the Vicar, who stated that he was quite within his rights and that his action had met with more approval than disapproval. No reason for the dismissal was given.