The Bideford & District Community Archive Centenary display will be at the following locations:

If you are unable to see the exhibition at either of these locations you are welcome to visit the Archive offices in Windmill Lane. Our opening times are: Monday – Wednesday; 9.30 am – 1.00pm

When thinking about, and planning for, the centenary exhibition I felt it needed to be approaching events by starting from the stories in our local paper, the Bideford Gazette; then researching further from there. To support me, I found a wealth of information from two local sources:

In addition, I must thank Catherine Webb, Paul Morrish, Peter Christie and Toni & Colin Elliot for their helpful contributions in spontaneous conversations that threw light on some challenging questions.

In the meantime, here is a snap shot of some of the stories I read and made further research from.

The research started back in February, when I sat down with the microfilm for 1914, (the original newspapers for 1914 - 1918 are especially in a deteriorated state) and started to read the news in the weeks leading up to the declaration of war on August 4th. As the Gazette was actually published on Tuesday August 4th, the outbreak of war did not make front page news. Unsurprisingly, we have to remind ourselves that news didn’t travel in the way we are used to now, so it wasn’t until page 5 that the people of Bideford would have read the article headed, ‘The European War’. Within days, the mood in Bideford would have been electric and people eagerly anticipating the next week’s edition.

The following week, August 11th , the iconic ‘Your King and Country Need You’ advertisement appeared in the Gazette and ran for three consecutive weeks. 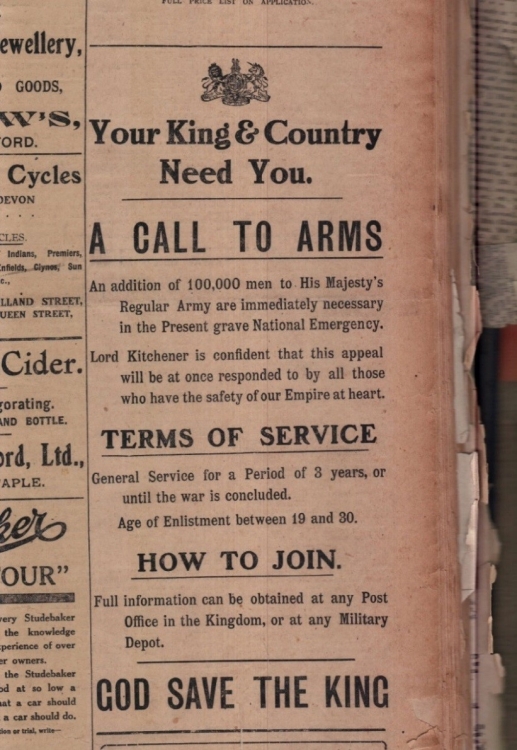 Sadly, the first local casualty story that made it into the August 11th 1914 edition was the reporting of the sinking of HMS Amphion, ‘It is known that there are in her crew some belonging to the Three towns and North Devon.’ 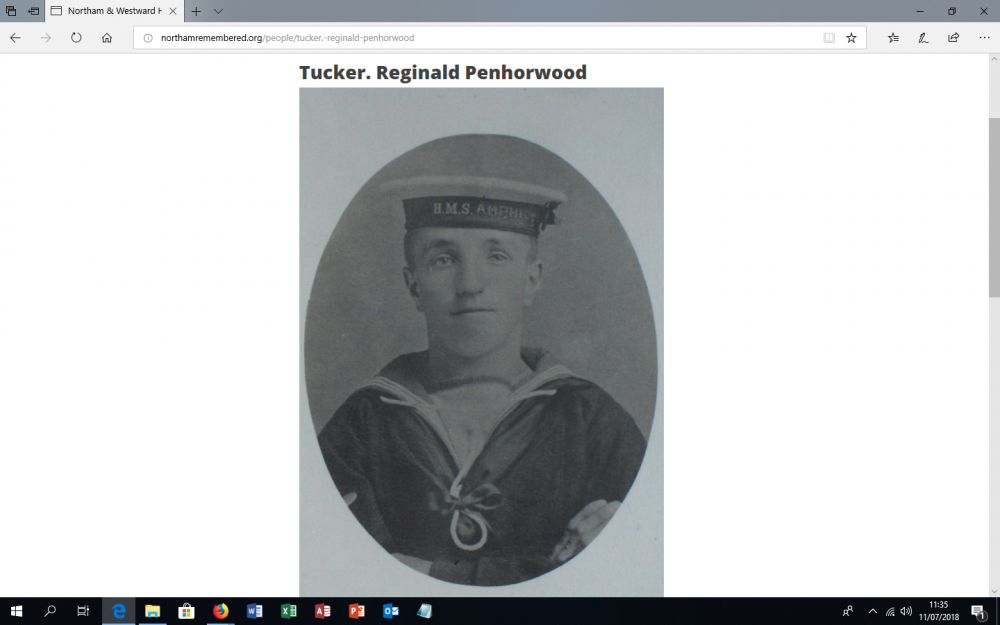 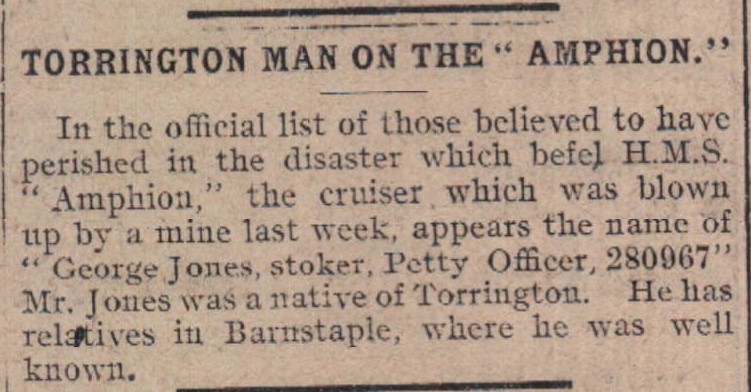 The ‘Letters to the Editor’s’ page gave Mayor Chope the opportunity to add his support to the war effort: 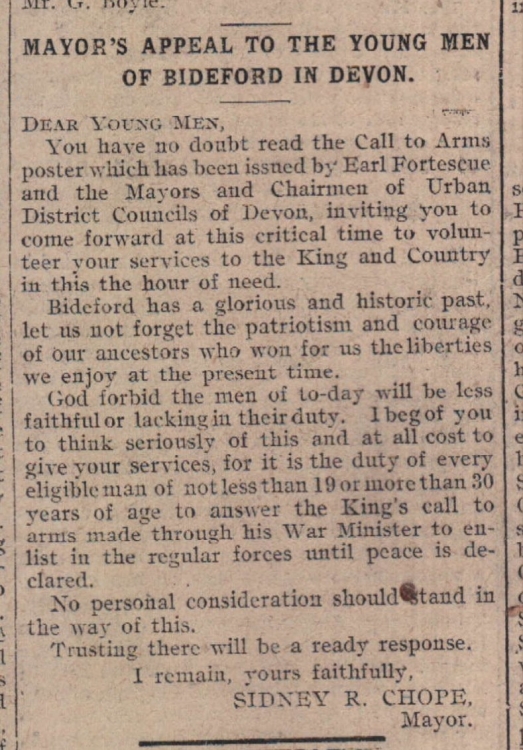 In the course of my research I came across the story of how Lord Derby instigated the setting up of ‘Pal’s Battalions’ https://en.wikipedia.org/wiki/Pals_battalion. One of the first shops to respond to this was Tattersill’s; General Grocer, Bideford.

Do you recognise any of these names? Are you a descendant? Do you have any family stories to share with us at the Archive? (Copp, Beer, Lee, Littlejohns, Sluman, Bale, Horrell, Williams, Northwood, Verren, Rendle, Heard, Hillman, Bowden)

Another consequence of men signing up to fight was that businesses, factories and farms found themselves needing to recruit a replacement work force; hence the rise of women taking their places. In the10th November 1914 edition of The Gazette appeared an account of a meeting held in Bideford:

Nevertheless, whilst the war was gaining in momentum, the people of Bideford would still have tried to carry on as normal a life as possible. Take note of the name of the premises in the advert below; ‘Palace’.

Speaking to another volunteer revealed the provenance of this building:

The next time you are in Wetherspoons, just imagine the different sounds that you would have been hearing 100 years ago!

Here’s another example of how an event can prompt a line of investigation from a story published on 17th November, 1914. 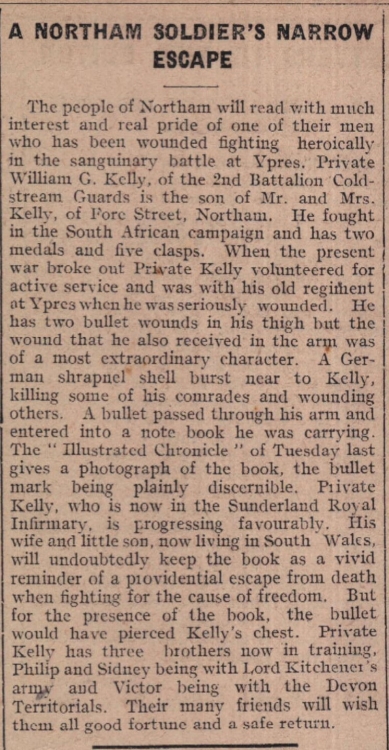 Research gleaned the following information: In the 1911 Census William Kelly was registered as living in Monmouthshire, South Wales, aged 28 and married with one child. William was awarded the Victory and British war medals for the 1914 campaign. Furthermore, he was also awarded the Silver War Badge in 1915 – see following link which gives a fascinating insight into this award. https://en.wikipedia.org/wiki/Silver_War_Badge

Interestingly, there were very few photographs in the newspapers of 1918, so the visual images would be limited to cartoons and drawings. Here are three of a series of five cartoons that appeared in the Gazette; but which stopped abruptly after the final cartoon at the end of February. 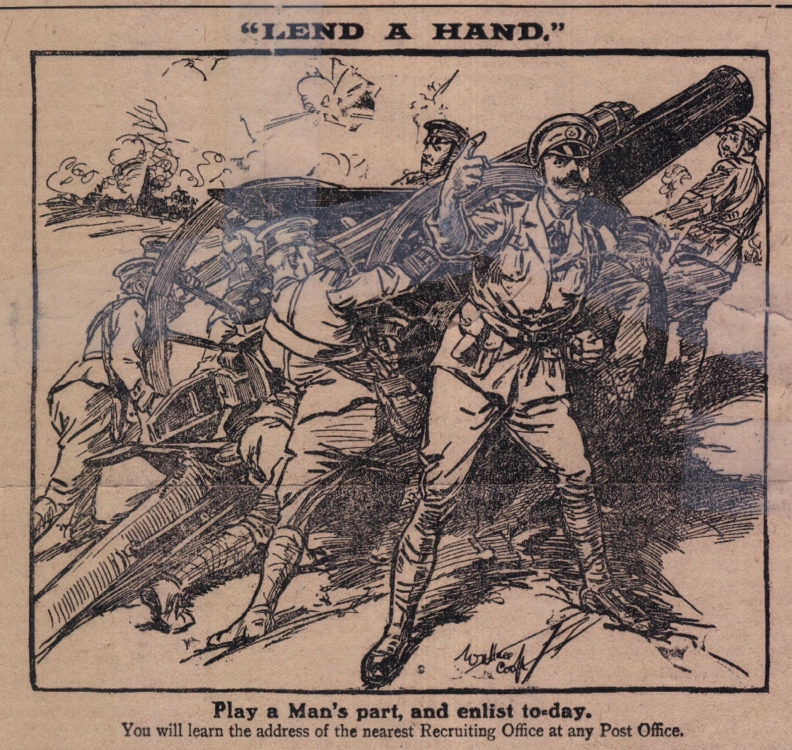 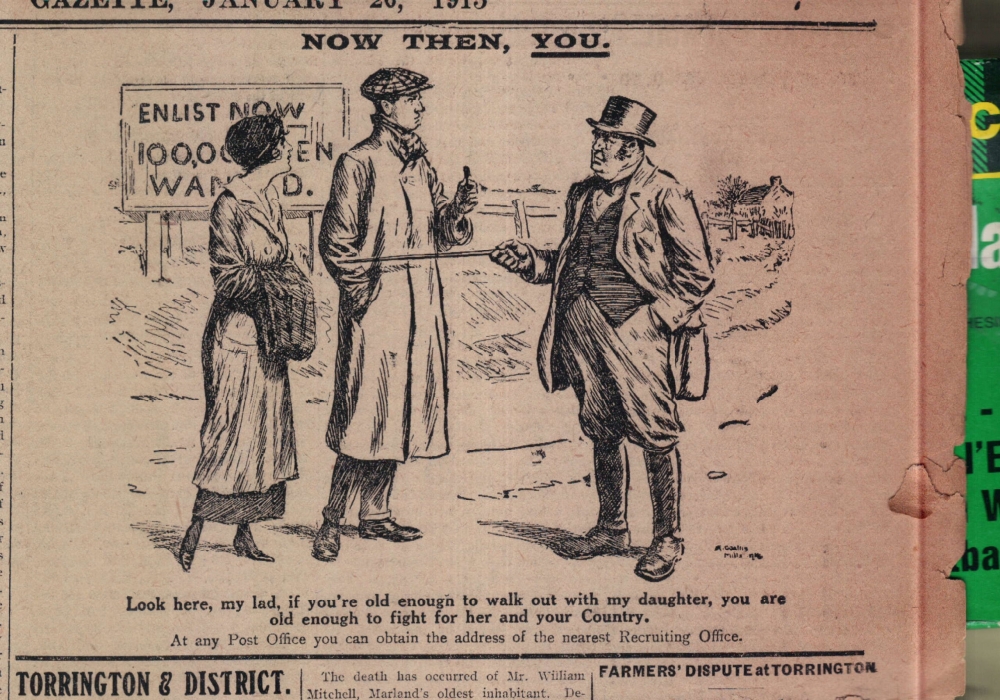 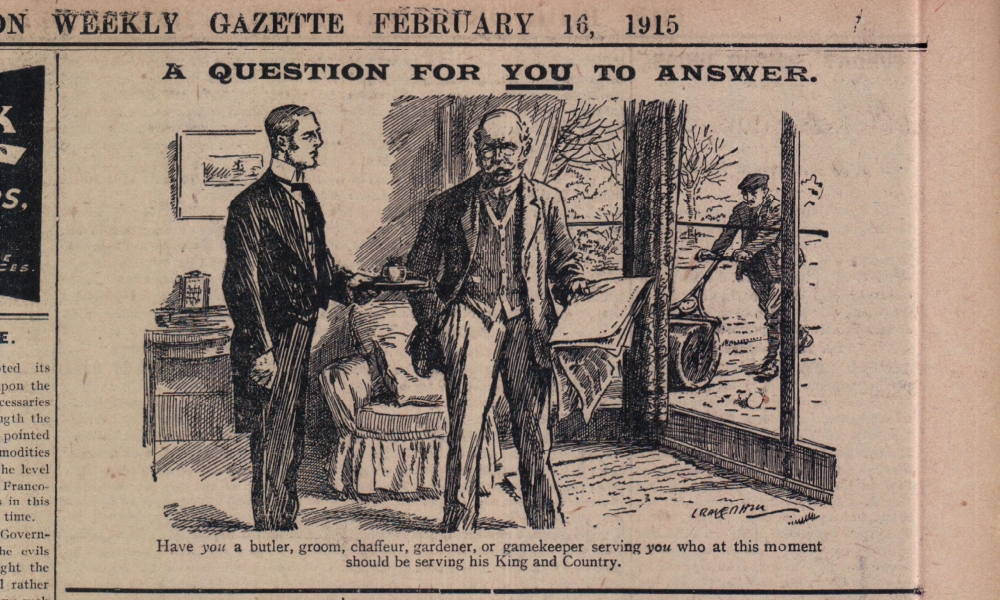 NORTHAM:
111 men gave their lives during World War 1. Toni Elliot, from St Margaret’s Church, Northam, has put together a display telling their stories. (See the opening times for this display at the top of this article)

Billy survived the war and went on to belong to the ‘Home Guard’ during World War 2. He died in 1989. Here are two anecdotes, told to me by colleagues at the archive.

Paul Morrish:
‘I worked with Billy, as we called him then, at Heard Brothers Garage in Bideford during the 1960s. (Heard’s was a part of the Brin ley Motor Company based in Barnstaple). Whenever Mr Backway (Reg) wanted to go to company meetings he would always ask for Billy to drive him over in the garage’s Morris. Billy was frequently teased by his work mates because of his height: at 5 feet tall, Billy could barely see over the steering well! Billy worked well into his 70s; and between us we racked up over a140 years of service…’

Una Ash
‘If you go the High Street Club, up the High Street in Bideford – which used to be known as The British Legion Club; you will find a plaque on the wall above the place where Billy used to sit.’ 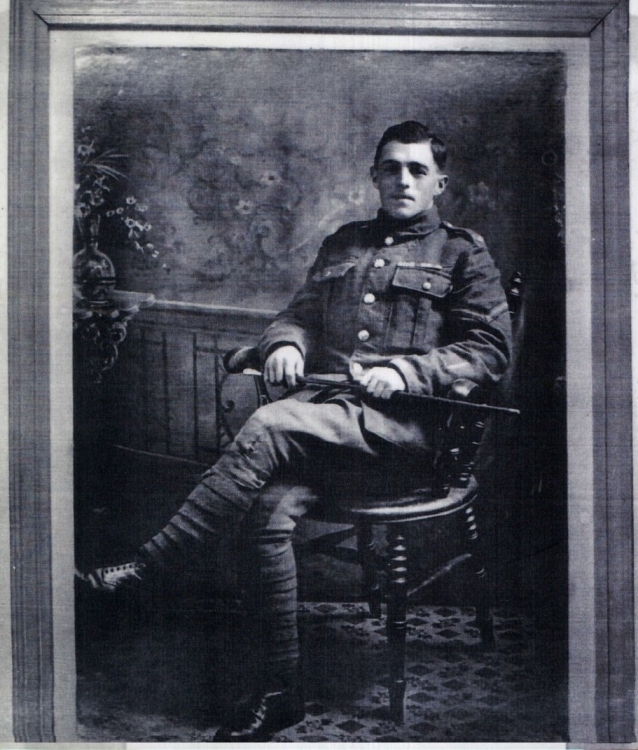 We believe that this letter was written by Private David Hearn, who, according to the 1901 Census was living in North East Street, Northam. He enlisted in May 1915 and joined the Royal Fusiliers. 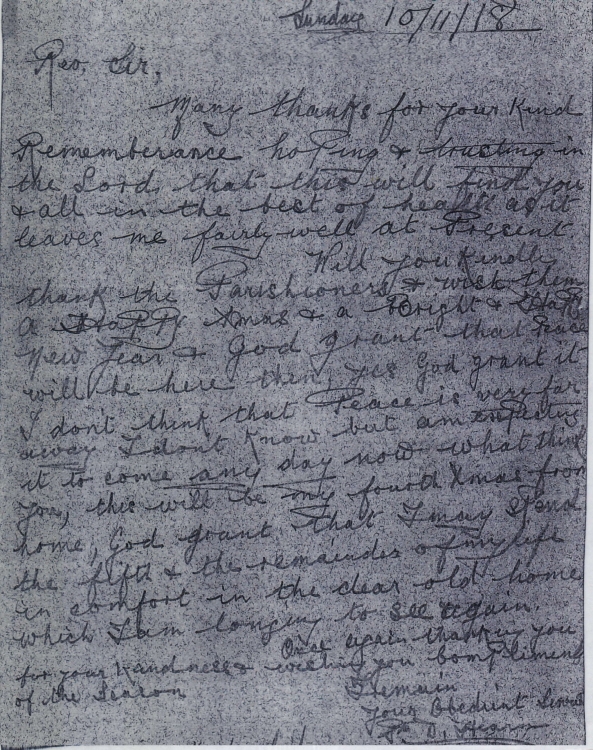 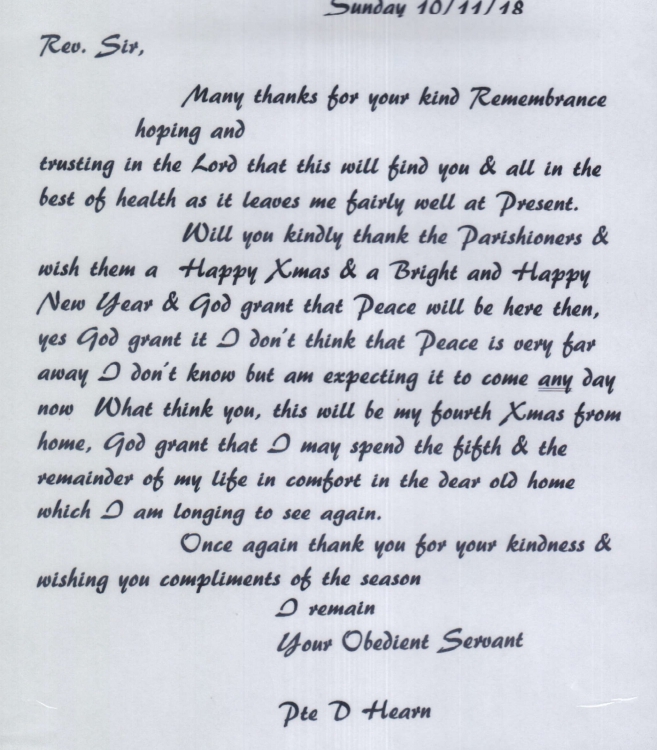 Descendants of the men who went to fight in the Great War still live in the area, and we hope to meet them at our exhibitions and hear their family stories in more detail.