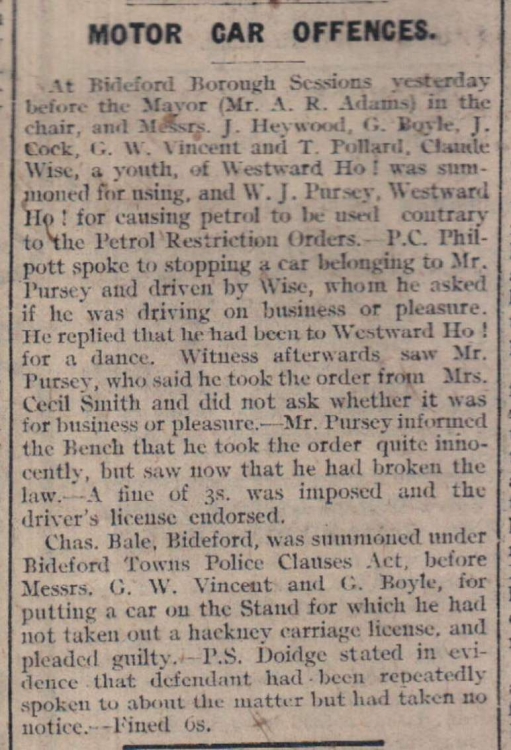 At Bideford Borough Sessions yesterday before the Mayor, Mr A R Adams, in the chair, and Messrs J Heywood, G Boyle, J Cock, G W Vincent and T Pollard, Claude Wise, a youth of Westward Ho! and W J Pursey, Westward Ho! for causing petrol to be used contrary to the Petrol Restriction Orders.
PC Philpott spoke to stopping a car belonging to Mr Pursey and driven by Wise, who he asked if he was driving on business or pleasure. He replied that he had been for a dance. Witness afterwards saw Mr Pursey, who said he took the order from Mrs Cecil Smith and did not ask whether it was for business or pleasure - Mr Pursey informed the Bench that he took the order quite innocently, but saw now that he had broken the law. A fine of 3s was imposed and the driver’s license endorsed.
Chas. Bale, Bideford, was summoned under Bideford Towns Police Clauses Act, before Messrs G W Vincent and G Boyle, for putting a car on the Stand for which he had not taken out a hackney carriage license, and pleaded guilty. PS Doidge stated in evidence that defendant had been repeatedly spoken to about the matter but had taken no notice. Fined 6s.