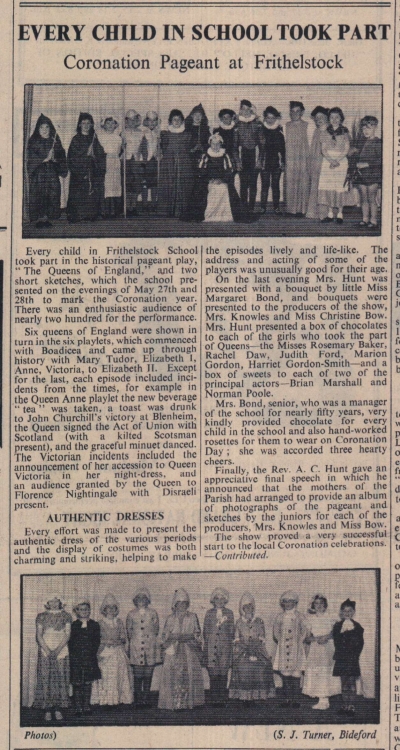 Every child in Frithelstock School took part in the historical pageant play, The Queens of England, and two short sketches, which the school presented to mark the Coronation year.
Six Queens of England were shown in turn in the six playlets, which commenced with Boadicea and came up through history with Mary Tudor, Elizabeth I, Anne, Victoria to Elizabeth II.
On the last evening, Mrs Hunt was presented with a bouquet by little Miss Margaret Bond, and bouquets were presented to the producers of the show, Mrs Knowles and Miss Christine Bow. Mrs Hunt presented a box of chocolates to each of the girls who took the part of Queens – the Misses Rosemary Baker, Rachael Daw, Judith Ford, Marion Gordon, Harriet Gordon-Smith – and a box of sweets to each of two of the principal actors, Brian Marshall and Norman Poole.
Mrs Bond, senior, very kindly provided chocolate for every child in the school and also hand worked rosettes for them to wear.
Finally, the Rev A C Hunt gave an appreciative final speech.
Full Gazette article is dated 12 June 1953