Bonfires and Fireworks Light up the Skies 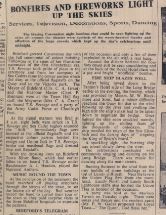 Services, television, decorations, sports, dancing
The blazing Coronation night bonfires that could be seen lighting up the skies all around the district were symbols of the warm-hearted loyalty and affection of the large crowds which kept up the day’s celebrations until midnight.
Bideford greeted Coronation day with the full ceremonial of colour hoisting. Following in the namesake of the first Elizabethan era, TS Revenge took pride of place in the ceremony and from her company of Sea Cadets came the colour parties which did duty at the official flagstaffs on the Quay and in the Victoria Park. The Mayor of Bideford, Cllr C A Grant, and Harbour Master, Capt P Brennan, were at the Town Hall flag staff, the Mayoress, Mrs C A Grant on board TS Revenge, and a party of the Army Cadet Force at Chudleigh Fort.
With the dressing lines up, Bideford Town Silver Band, under Bandmaster A J Headon, played the National Anthem.
The telegram sent on behalf of Bideford for delivery to Her Majesty on Tuesday was as follows: ‘The historic Borough, Manor and Port of Bideford in Devon offer warmest loyal greetings to Your Gracious Majesty and to His Royal Highness the Duke of Edinburgh and to your Royal children and we humbly but fervently extend to you and to them our loving thoughts and congratulations on this great day in the history of our beloved county. May God bless and keep you all’ Signed Charles Grant, Mayor’.
Wards were decorated and there were special menus in the three Bideford hospitals, and many of the patients watched the Coronation proceedings on television sets installed in the wards. At the Torridge Hospital, Mrs Jane Anstey, who is 101, was among those watching the broadcast. Coronation iced cakes specially prepared for each ward by hospital chef Mr R Jury were cut by the Matron, Mrs Morris.
The comic ‘rug-ball’ match between Bideford Association Football Club and Bideford Rugby Club nearly did not take place for, with the players line up on the field, it was found the Press had ‘borrowed’ the rugger ball. Perhaps it was because the soccer men were hampered by their long women’s underwear and the rugby players had to hold up pyjama trousers and remove their headgear or false noses to head the ball that there was no score at half-time. The game was refereed by Mr R Ellis and players were: E R Harris, G Cork, M C Bird, C T Mill, R Colwill, M Sawtell, T N Trickey, C Davis, B J Cording, T Fogaty, L Tithecott, K Harris, R Anstis, C Higgins, P Williams, M Green, D Bromell, M Drew, P Adams, D Bale, K Hearn and P Rivers.
Bideford Youth Club presented an hour of ‘music and fun’. Those taking part were: Eric Littlejohn, Maureen and Sylvia Powe, Bob Tithecott, Alan Curtis, Malcolm Low and the Youth Club Singers.
Hundreds of excited children, parents and friends witnessed the lighting of the bonfire at Pollyfield by the Mayoress. The bonfire, which was erected by the 2nd Bideford Boy Scouts, included three tons of wood in its construction. The Mayoress was accompanied by the Mayor, the Town Clerk (Mr F C Backway), and the secretary of the Coronation Committee, Miss M Mercer. Scouts formed the Guard of Honour.
Around the distant horizon the bonfires could still be seen and at the back of the Royal Hotel there was a gay and bright unofficial bonfire.
After being towed down to Tanton’s Hotel side of the Long Bridge earlier in the evening, the fireship, which was provided by Messrs M W Blackmore and Sons, had a minor difficulty reaching the Quay.
Bunting fluttered in the wind from the tiny huddle of stone buildings at the top of Lundy cliff path. Near the tavern, the Union Flag flew from the masthead. Lundy North and Lundy South lighthouse staffs also hoisted the Union Flag. A party was held at the Marisco Tavern. There were songs and dances and the resident agent, Mr F W Gade, proposed the Loyal Toast – ‘The Queen, God bless her’.
The full Gazette article is dated 5 June 1953